On 13 February 2020, the Governor of the Bank of Albania, Mr Gent Sejko, held an official meeting at the Bank of Albania with the new Ambassador of Italy to Albania, H.E.  Fabrizio Bucci. Discussions in the meeting focused on the performance of the Albanian economy and banking system, the promotion of Albania potentials, in terms of the bilateral economic relationships, and the European Integration process of Albania.

During the meeting, Governor Sejko introduced Ambassador Bucci to the financial developments in the country, stating that the Albanian banking system is liquid, capitalized and with good indicators of profitability.  The main indicators of banking system soundness are improving, while the non-performing loans ratio dropped at its lowest historical level of 8.4% in December 2019.

Speaking about the economic performance of Albania, the Governor pointed out that the growth pace continued its positive trend; employment grew, while the domestic and external equilibriums of the country are strengthened.  The Bank of Albania has provided the needed contribution through the accommodative monetary policy stance for supporting a stable economic growth and safeguarding the macroeconomic stability of Albania.

Governor Sejko stated that Bank of Albania remains committed to approximating the legal, regulatory and operational frameworks to that of the European System of Central Banks and in fulfilling the priorities arising from the further steps in the framework of the European integration processes of the country.

On his part, the Ambassador of the Republic of Italy, H.E. Fabrizio Bucci commended the Bank of Albania as one of the key institutions in Albania. The Ambassador emphasised the importance of the joint projects of the Bank of Albania with the Bank of Italy and the European Central Bank for the further development of its institutional capacities. These projects will contribute to the approximation to the European standards and acceleration of European integration processes of the country. 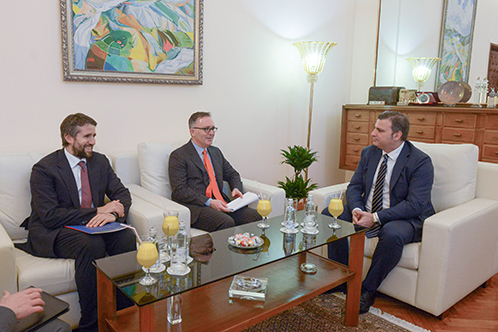 The interlocutors concurred that the negotiations should serve as a development factor and an enhanced guarantee for both the Albanian and foreign investors in the future.  Also they concurred on the continuation and deepening of the structural reforms, as a rather important factor for the long-term and stable growth of the country.

The Ambassador, H.E. Fabrizio Bucci, also highlighted the role of remittances and the importance of further strengthening the economic cooperation between the two countries for boosting foreign investments in Albania.

Governor Sejko commended the successful collaboration between the Bank of Albania and the Bank of Italy, the joint projects that have been undertaken so far, in particular the implementation of the current Twinning Project “Enhancing Bank of Albania’s alignment with EU Acquis”, in the framework of the Instrument for Pre-Accession Assistance (IPA II).