The agenda focused on the most recent assessments about the developments in the institutions and markets the present financial authorities supervise. 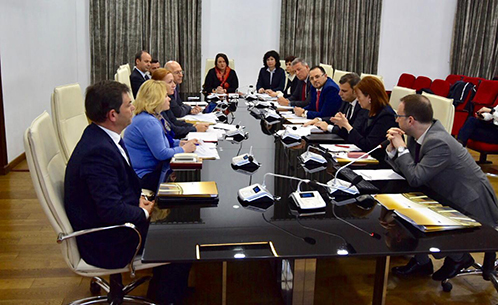 The presentation by the Bank of Albania focused on the assessment of the banking system’s financial situation and highlighted that, overall, developments were positive in 2018. Financial markets functioned normally, while volume of transactions remained stable and interest rates low. The banking sector expanded its activity, notwithstanding the reducing statistical effect from the exchange rate appreciation of the Albanian lek (ALL). The banking sector’s exposure to the activity risks was contained. The non-performing loans fell by around ALL 15 billion, driving the non-performing loans ratio down at 11.1%. The contribution of repayments to the fall of non-performing loans increased; thus, enhancing the steadiness of the downward trend of non-performing loans. Market risk indicators did not show pronounced changes over the year, but it remains necessary to carefully assess the indirect impact of exchange rate and of interest rates. Banking sector’s capability to withstand risks is assessed as strong, while the liquidity situation assessed as very good and the banking activity as profitable and well capitalised. The presentation also evidenced the structural changes taking place in the banking sector until Q1-2019. Following these changes, the share of domestic capital in the banking sector has increased. In addition to the consolidation of the banking sector, this development is expected to affect positively the growth of bank lending. Also, on-going initiatives on various legal and regulatory improvements in the field of micro- and macro-prudential supervision and of payment systems were presented. Proposed changes in the payment systems’ law, will expand possibilities that technological advances improve public access to financial services, at lower costs and at faster speed. This will provide concrete benefits to relevant stakeholders and to transactions that are important for the entire economy, including remittances. More broadly, these proposed changes are expected to contribute significantly on the formalization of the economy and the growth of financial intermediation.

Further, the FSAG members discussed on the need for identifying actions to gradually enhance the use of domestic currency in the real sector of the economy. The discussion emphasised the importance of this step for successfully achieving the objective for the overall increase of the use of ALL in the financial system and Albanian economy. In compliance with the relevant inter-institutional strategy[1], representatives of the Ministry of Finance and Economy committed to address this issue with priority.

Representatives of the FSA acquainted members of FSAG with the recent developments in the financial markets FSA supervises. The presentation evidenced developments in: voluntary pension funds, investment funds and retail securities market. In the latter, transactions between households and the preference for short-term securities of government debt dominate. In addition, they informed about efforts by the stock exchange to begin the trading of private debt and capital securities, particularly after the establishment of the base infrastructure for their clearing and settlement. Regarding the insurance market, FSA representatives evidenced the increase of gross paid premiums over 2018, and also the rapid growth of the indemnities. The compulsory vehicle insurance dominates the market structure, having the highest share in gross written premiums. In the framework of convergence with European standards and to better address local market developments, the members of FSAG were informed about the main elements and the status of several draft-laws prepared by the FSA related with the activities of compulsory insurance in the transportation sector, collective investment undertakings and capital market.

After the discussions of the issues set out above, the senior officials of the institutions assessed positively the developments in the financial system, in financial markets and in the relevant regulatory framework, by affirming the stability of the financial system. They highlighted the importance of monitoring the financial developments and accelerating the process of legal and regulatory improvements, to address the respective problems and ensure the approximation with the best standards in the respective fields.

At the conclusion of discussions according to the agenda, the senior officials representing the participating institutions approved this press release and authorized its publication.

[1] Memorandum of Cooperation “For strengthening the use of national currency in the financial system and the Albanian economy”, signed on 18 April 2017.