Let me start this communication a little differently, on behalf of myself and of the Supervisory Council of the Bank of Albania, I would like to express the deepest sympathy for the grievous losses caused by the devastating earthquake that hit Albania on November 26th, 2019. Our hearts and prayers are with everyone who has been affected by the dreadful disaster. Dealing with the consequences of natural disasters such as this earthquake requires courage, solidarity and joint efforts to strengthen and recover the affected families, communities and businesses. 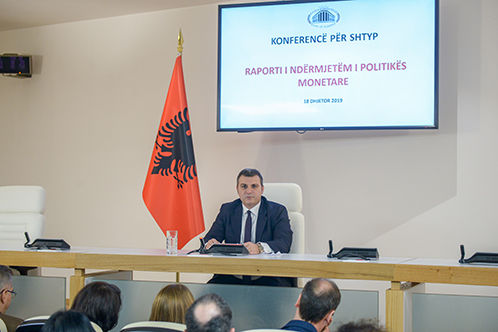 In today’s meeting, December 18th, 2019, the Supervisory Council of the Bank of Albania reviewed and approved the Intermediate Monetary Policy Report.

Furthermore, the Supervisory Council notes that a comprehensive assessment of post-earthquake economic consequences requires some more time. This assessment would pave the way for revising our medium-term forecasts and judgment on the future path of monetary policy. 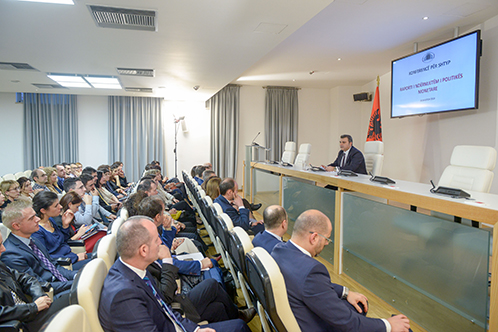 Available data show that in the fourth quarter inflation rates remained largely unchanged from the previous quarter. Fluctuations in inflation were caused to a larger extent by volatility in food prices, which continue to provide the main contribution to inflation.

From the macroeconomic perspective, the behaviour of prices continues to reflect low inflationary pressures from both the external and domestic economy. In international markets, prices have been rising slowly, while the transmission to the domestic market has decelerated due to the exchange rate appreciation in 2018. Similarly, the increase in aggregate demand, employment and wages in Albania is yet to be translated into adequate inflationary pressures for the convergence of inflation with our target.

Indirect available data suggest that in the third quarter, economic growth was similar to the previous quarter. Economic activity expanded driven by growth of consumption and private investments and, in particular, expansion of revenues from tourism.

The performance of the economy was reflected in labour market data for the third quarter, which show that employment gained 3.3% in annual terms, as unemployment fell to 11.4% and average wages increased by 3.5% annually.

The increasing trend of aggregate demand indicators and of the capacity utilisation rate has also reflected the effect of our accommodative monetary policy stance. As a result of this stance, the financial environment is characterised by low interest rates, contained risk premia and low volatility, and stable exchange rate.

The favourable financial environment and improved credit demand and supply created for the premises for a further improvement of credit to the economy. In particular, the consolidation of the banking sector and the reduction of credit risk, as illustrated by NPLs drop to 9.5% in November, have dictated a more active approach by banks toward lending.

Corrected for the exchange rate effects and NPL write offs, credit to the private sector registered an 8% annual growth in October. Growth was broad based as it was driven by the expansion of credit to both households and enterprises. In this context, we must note that the growth of credit to enterprises for investment purposes shows encouraging signals for increased support by the banking sector to the economy’s funding needs. In addition, the progressive expansion of the share of lek credit in total credit - which recorded 48% in October - provides also positive signals for an enhanced effectiveness of our monetary policy.

Our earlier projections have suggested that inflation will be on an upward trajectory in the medium-term horizon, to converge with our target in the second half of 2021. This projection was based on the expected improvement of the pace of economic growth, which would in turn increase wages and production costs, as well as provide increased exchange rate stability, something that would facilitate the transmission of foreign inflationary pressures.

Overall, the Supervisory Council deems that - even taking into account the November 26th earthquake consequences - this framework of projections remains valid for the medium term.  Nevertheless, these consequences - for their major part - are adverse and may impose a time lag for the return of the economy to equilibrium and of the inflation to target.

In this regard, the Supervisory Council notes that:

-First, in the absence of complete official assessments on the extent and size of damage, it is almost impossible to make precise assessments on the expected impact on the economy.  In particular, it is important to identify the damages caused to production capacities of firms operating in tourism and in other sectors of the economy, to estimate re-construction costs and possible unrealised revenues for the economy.

-Second, the consequences of the earthquake are expected - as a whole - to be negative, albeit concentrated on a limited geographical area and uneven across the sectors of the economy.  The main transmission channels will be the possible contraction of consumption and private investments in the affected areas and the possible fall of production in these areas - particularly in tourism.  On the other hand, the re-construction programme is expected to give a positive stimulus to this sector.  The intensity of shocks and the degree of compensations under the re-construction programme will determine also the entire effect of earthquake on the economy.

-Third, the earthquake effect will also depend on the form and intensity of the response.  The Supervisory Council notes that the rapid addressing of damages would alleviate their impact on economy.  Also, the financing structure of this re-construction program and the relative share of grants and donations, increase of borrowing and re-allocation of expenditures will also have their impact.

-Fourth, the Bank of Albania is in the process of assessing the consequences of the earthquake in the indicators of the banking system. For this reason, we have requested the necessary information from commercial banks and we are waiting on preliminary assessments from them.

-Lastly, the Supervisory Council emphasises even under extreme scenarios, our projections suggests that:

-The economic growth rate is expected to remain in a positive territory for 2020 and onward; -

-The monetary and financial stability of the country remains unaffected.

Judging on the above, the Supervisory Council decided to:

-Keep the policy rate unchanged at the present level 1.00%; and,

-Keep the overnight deposit and overnight lending rates, unchanged at 0.1% and 1.9%, respectively.

The Supervisory Council deems that the fulfilment of our objective - price stability - would require maintaining the accommodative stance of the monetary policy in the medium term. A clarification on earthquake’s consequences would provide a more precise view on the expected developments and the future monetary policy stance. In particular, the materialisation of the strong negative shocks may require further easing of it.