PRESS RELEASE
Governor Sejko: Address to the Assembly of the Republic of Albania presenting the Annual Report of the Bank of Albania for 2018

The Bank of Albania pays particular attention to fostering institutional relations with the Assembly of the Republic of Albania, based on the spirit of accountability and transparency, and nourished by a constant and reciprocal dialogue.

In this light, I thank you for the invitation and the opportunity to present in a plenary session to the Assembly, the main conclusions of the Annual Report of the Bank of Albania.

Let me start by emphasising that the Bank of Albania has made progress with regard to all the three underlying aspects of our work:

The Bank of Albania estimates that, in 2018, the Albanian economy and financial system made progress. Economic activity and employment continued to expand, wages and domestic inflationary pressures trended upward, main banking sector’s soundness indicators improved, and a series of indicators of domestic and external economic balances strengthened. 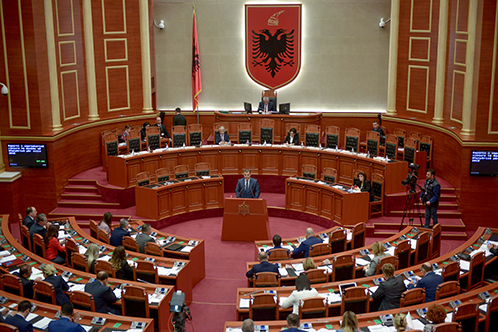 Let me present a few indicators to illustrate this.

This dynamics of developments reflects, to a significant extent, the effect of policies, measures and instruments the Bank of Albania has adopted on continuous basis. In the following, I will focus in greater detail on the measures taken by the Bank of Albania on monetary policy, banking regulation and supervision and financial market development.

In line with our primary objective - achieving and maintaining price stability - our monetary policy retained, even strengthened, the accommodative stance in 2018. This stance is consistent with the cyclical position of the Albanian economy, and aligned with the consolidation trend of the fiscal policy.

Albeit the positive performance of the economy, for 2018, annual inflation averaged 2.0%, remaining unchanged from the previous year and undershooting our 3% target. Inflation reflected the effects from two developments in opposite directions: the build-up in domestic inflationary pressures, generated by the rise in employment, wages and production costs, was offset by the rapid appreciation of the domestic currency.

Beyond fundamental factors, the appreciation reflected the effect from specific shocks, which led to a temporary imbalance of demand and supply for foreign currency and contributed to a change in the behaviour of certain operators in the economy. They initiated a rapid appreciation spiral in the second quarter and were accompanied by a disorder in the functioning of the domestic foreign exchange market.

The accommodative monetary policy implemented by the Bank of Albania has proven successful for boosting economic growth, a better utilisation of production capacities and building up inflationary pressures in the economy. The monetary stimulus transmission has been evident in several aspects:

The activity of the banking sector in 2018 was stable showing good performance and resilience indicators. The financial result was positive: the Return on Assets (RoA) stood at 1.3% and the Return on Equity (RoE) reached 13%. In addition, capitalisation and liquidity levels were above the respective regulatory requirements.

The Bank of Albania judges that the capability of the banking sector to withstand risks is high. Credit risk continues to represent the main risk to the activity of the banking sector, but the credit quality has improved from the previous year. At the end of 2018, the non-performing loans ratio stood at 11.1% from 13.2% a year earlier, whereas the outstanding non-performing loans decreased by 20%.

The main aspects of our work for safeguarding financial stability consisted in strengthening the stability of the banking system, enhancing its resilience to shocks, and adopting international standards in the fields of supervision and regulation. Thus, in concrete terms:

Lastly, I would like to reiterate that safeguarding financial stability is a responsibility not only of the Bank of Albania, but also of other regulatory agencies and the Government of Albania. Policies and measures for safeguarding financial stability and strengthening banking system’s resilience require that all parties continue the coordinated, inter-institutional and multi-dimensional efforts.

In view of its duties and commitments, the Bank of Albania has continued to promote the development of the financial market and to improve further the payment system.

Thus, in cooperation with the Ministry of Finance and Economy, the project for promoting the development of the primary and secondary markets for government securities continued successfully. This project paves the way for deepening the financial market, expanding and diversifying the base of investors in government debt and reducing its cost in the long term.

Moreover, the Bank of Albania has dedicated particular attention to guaranteeing the security and efficiency of the core infrastructure of payments in lek, through its role as operator, overseer and catalyst of the payment systems. The finalisation of the draft-law “On Payment Services”, which transposes the relevant EU Directive (PSD 2), is one of the main achievements on the improvement of the legal framework. Its approval and implementation is expected to foster competition and promote innovation in retail payments, cut costs, enhance transparency of these services, and provide a framework on consumer’s protection.

In parallel, the National Payment System Committee, chaired by the Bank of Albania and bringing together public and private stakeholders in the field of payments, approved the Albanian National Retail Payments Strategy (2018-2023). The scope of the strategy is to improve the retail payments market, promote the use of electronic payment instruments and broaden the financial inclusion of the population.

The accomplishment of our primary development objectives evidences the professional work of Bank of Albania staff and of the constant prudence of the Supervisory Council, as the steering and monitoring body over the activity of the Bank of Albania.

In addition to the monetary policy and financial stability-related issues, other important decisions of the Supervisory Council in 2018, were: (i) approval of the policy for the oversight of payment and settlement systems;(ii) approval of the Accounting Policy in accordance with the International Financial Reporting Standards; and, (iii) approval of the Medium-term Development Strategy of the Bank of Albania for 2019-2021. The strategy upheld the existing mission, vision, and values and updated the list of duties for fulfilling them. In parallel, the Supervisory Council has monitored continuously the governance of the institution and has worked towards its improvement.

In conclusion, I would like to emphasise that the Bank of Albania has realised its duties and accomplished its commitments in other fields of its activity, which have a direct or indirect impact on economic and financial developments in Albania. More specifically, progress has been made on:

The outlook on Albania's development remain positive; yet, challenges lie ahead. Addressing them requires the attention and the commitment of all policy makers and regulatory agencies in the country.

In particular, in Bank of Albania's opinion, guaranteeing sustainable and long-term growth requires maintaining the focus on monetary and fiscal policies that are oriented toward stability, by using in a wiser and more efficient way the available space for stimulating the economy, without affecting the stability of public finances and of the financial sector. In parallel, development policies should aim to reduce risks and mitigate structural vulnerabilities in the economy.

In the long term, the further acceleration of the economic growth pace and a fairer allocation of resulting benefits from it to various economic and social categories will require continuing and revving up the structural reform agenda.

I would like to assure you that the Bank of Albania will continue to be committed to complying with our legal objectives, and to realise our institutional duties and commitments.