In line with tradition, and to serve the purposes of transparency and accountability, I would like to present a brief overview of the work of the Bank of Albania in 2018.

Activity of the Supervisory Council

In accordance with legal and regulatory provisions, in 2018, the Supervisory Council of the Bank of Albania held 15 meetings, reviewing and approving a series of issues pertaining to monetary policy, financial stability, banking supervision, and other operational aspects. 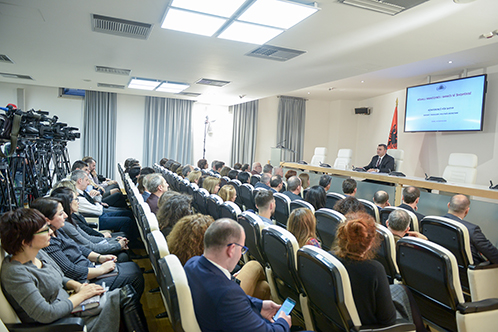 In accordance with its duties and powers, and pursuant to the work-plans and development priorities, the Supervisory Council adopted 69 decisions, of which 48 were new legal acts and 21 amendments to existing legal acts.

The Supervisory Council has also regularly received information about the Bank's management policies and methods and procedures regarding the use of financial assets for the operational activity, as well as about findings and recommendations of the Internal Audit.

The year 2018 marked important developments with regard to the expansion and deepening of financial markets. Application of the primary dealers system was a notable development in this regard. A pilot project was implemented on the issuance of five-year benchmark securities with commercial banks, which now play the role of market setters. The Bank of Albania supported the Ministry of Finance and Economy in this project with the operational side of activities and drafting of the regulatory framework.

The Bank of Albania assesses the financial sector as stable. In particular, the banking sector continues to expand its activity, remaining liquid and well capitalised at the same time. The sector's exposures to market risks remain contained, while the liquidity risk is assessed as low.

Credit quality improved in 2018: the non-performing loans (NPL) ratio stood at 12.43% at the end of the third quarter, from 13.23% at the end of 2017. Improvement of credit quality was mainly attributable to repayments. At the same time, recoverability also made a contribution. Relatedly, the Bank of Albania promoted systematic and formalised treatment of NPLs, particularly for large borrowers, by drafting a special regulation for this purpose, in accordance with the best international practices and country-specific characteristics.

Strengthening banking supervision and supporting financial stability remain fundamental objectives of the Bank of Albania. These objectives are realised through our licensing, regulatory and supervisory role. Let me explain this in greater detail.

With regard to licensing, in 2018, ownership of certain banks changed significantly. The Supervisory Council of the Bank of Albania approved, by decision, legal reorganisation through merger by absorption of some banks, as well as the modification or expansion of the scope of activity for some other financial institutions. The above structural changes are expected to contribute to improving the efficiency of banking activity and financial intermediation.

With regard to banking supervision, in line with established objectives, the Bank of Albania realised, throughout the year, both full-scope and partial examinations in banks and non-bank financial institutions, as well as in foreign exchange bureaus. Related to this, coordination with the General Directorate for Prevention of Money Laundering continued with joint AML/CFT inspections.

In November 2018, a Memorandum of Cooperation on banking supervision was signed between the Bank of Albania (BoA) and the European Central Bank (ECB). The signing of the Memorandum formalises the cooperation mechanisms and sharing of information between ECB and BoA and is essential for ensuring effective and comprehensive supervision of entities under the jurisdiction of each regulatory authority.

At the same time, upon the invitation of the ECB, the Bank of Albania was able to participate in the supervisory colleges for two banks, members of EU-based banking groups. Sharing experiences and information on group-level plans makes a valuable contribution towards orienting the supervisory process for such banks.

With regard to banking regulation, the Bank of Albania has continued to work towards completion of the macro-prudential policy framework of the central bank. During 2018, early warning systems related to systemic risks, were improved, setting out a list of indicators used for identifying them.

In order to approximate the regulatory framework to the European Union directives and regulations on the activity of credit institutions, and with Basel Committee standards on effective supervision, the Bank of Albania has amended some of the existing regulations on regulatory capital and banking transparency, and has successfully completed compilation of the new draft-regulation on the “Liquidity Coverage Ratio”.

The Bank continued to pay special attention throughout 2018 to monitoring credit risk both for the entire system and for particular banks, focusing on the quality indicator of the credit portfolio.

Lastly, the Bank of Albania actively participated in completing the Moneyval comments on the fifth round of assessment of Albania on anti-money laundering and combating financing of terrorism (AML/CFT), with regard to both Effectiveness and Technical compliance. At the conclusion of this process, a final document for Albania - which clarifies a set of recommendations - was compiled. The Bank of Albania has a role regarding a part of these recommendations. For their implementation, it has compiled a short-term action plan.

In parallel with the above aspects of its work, the Bank of Albania has paid attention to the strategic aspect of the supervisory and regulatory architecture of the financial system.

In this regard, the Bank of Albania is committed to:

In addition to the main aspects of the work of the Bank of Albania described above, I would like to focus also on some other aspects. These activities conform to our legal obligations and, at the same time, serve the development of the financial system and a market-based economy in Albania.

The Bank of Albania co-organised with the London School of Economics and Political Science (LSE) the Annual Conference: “Monetary Policy, Economic Integration and the “New Normal”. The research work of the Bank of Albania was also presented and discussed in the 12th SEE Economic Research Workshop, where 37 research studies were presented, by researchers from the Bank of Albania and academics and financial institutions from Europe, the USA and the region.

This is the last event with the media for this year, and I take this opportunity to wish you, and through you the Albanian public, a very happy festive season, and I kindly invite you to follow closely the work and activity of the Bank throughout 2019.

I would like to reassure you that the Bank of Albania will continue to be a serious and reliable partner, capable to tackle the challenges ahead.