On 2 October 2019, the Supervisory Council of the Bank of Albania reviewed and approved the Intermediate Monetary Policy Report.

The Supervisory Council concluded that the new information analysed in this Report has resulted, overall, in line with our expectations. Inflation was slightly up in July and August, economic growth continued to reflect the effect of short-term shocks, while financial conditions remain stimulating. 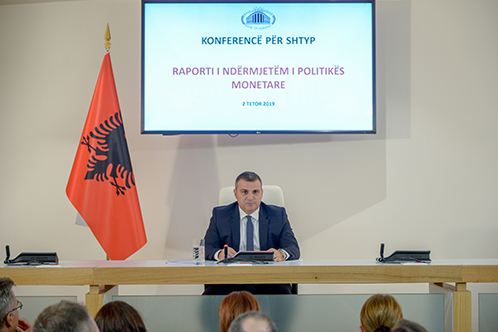 The Supervisory Council assessed that notwithstanding the supply-side shocks, the development trend of the Albanian economy remains positive. This performance is reflected by the fuller utilisation of production capacities, rise of both employment and wages and the acceleration of lending.

Based on the above, the Supervisory Council re-affirmed the expectations on the positive outlook for the economy, while concluding that downside risks have increased.

Against this backdrop, the Supervisory Council judges that the current monetary policy stance is adequate.

Inflation averaged 1.5%, in July and August, from the 1.4% average recorded in the previous quarter. Fluctuations of inflation during the last months reflected the volatility in food prices, whereas inflation of other basket’s items was overall, stable or at a slight upward trend. 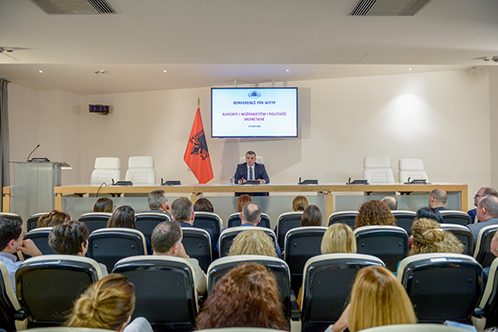 From the macroeconomic perspective, inflation performance has reflected the build-up of domestic inflationary pressures, while imported inflation has been downward, driven by the downward trend of both inflation and commodity prices in international markets.

According to INSTAT data, the Gross Domestic Product grew 2.3% in the second quarter. (In parallel INSTAT, revised upward the growth rate for the first quarter, at 2.4%).

From the production perspective, economic growth was driven by the expansion of activity in services and agriculture in the second quarter. Industry and construction sectors showed downward performance. From the aggregate demand perspective, economic activity growth reflected the expansion of consumption, while investment and the balance of external trade provided a negative effect.

The preliminary available data for the third quarter suggest a similar performance to the previous quarter. 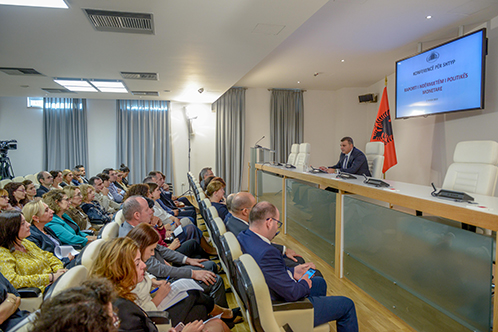 Growth slowdown in 2019 H1 reflects mainly the reduction of electrical energy production and partially the effect of the finalisation of large energy projects. Related to the above, the Bank of Albania expects these supply-side shocks to be transitional. Their effect will be visible on the growth rate of 2019, but it does not affect our assessment on the cyclical situation of economy and our expectations on the medium-term trends of the country’s development.

In this context, the increase of employment in the second quarter, in parallel with the 11.5% fall of the unemployment rate and the 4.5% increase of the average wage, suggest that the expansion of aggregate demand is sufficient to ensure the upward utilisation of production capacities.

This positive trend of developments reflects also the effect of our accommodative monetary policy.

In response to our monetary stimulus, both financial markets and monetary conditions remain accommodative for fuelling aggregate demand and for inflation to converge to target.

In particular, the growth pace of credit to the private sector continued to accelerate at an average rate of 7.4% in the first two months of the third quarter.

Credit growth continues to show a broad base, reflecting both the acceleration of credit to enterprises and households and the expansion of credit in lek and foreign currency.

The positive lending trend benefited from the increase in both credit demand and credit supply. The improved supply shows the falling risk of lending in Albania, as illustrated by the fall of non-performing loans to 11% in August, and the positive effect of banking sector re-structuring through the entry of new actors in the market.

Reflecting the above information, the update of our economic and inflation growth projections did not show considerable changes from the previous round.

In our baseline scenario, the Bank of Albania expects economic growth to continue during the medium-term horizon. The overcoming of supply-side shocks is expected to be accompanied by an acceleration of growth in the next two years. The expansion of economic activity will be fuelled by favourable financial conditions and further expansion of lending, and will be supported by sound financial balance sheets of the private sector and the improvement of confidence.

Based on our projections, the Bank of Albania expects inflation to return to target within the second half of 2021.

In light of the above, the Supervisory Council highlights that the materialisation of these risk shocks would require a revision on the easing side of the monetary policy stance.

The Bank of Albania advocates for the continuation and acceleration of structural reforms as the main instrument to increase productivity, potential output and country’s resilience against shocks as well as to strengthen convergence towards the European Union standards.