Today, on 6 November 2019, the Supervisory Council of the Bank of Albania reviewed and approved the Quarterly Monetary Policy Report.

The new information analysed in this Report has resulted, overall, in line with our expectations. Economic growth continued to slow down in the second quarter, in line with the performance observed in the previous quarter, while inflation remained low, undershooting the target in the third quarter. 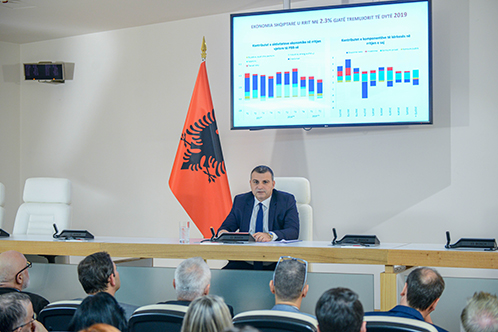 In the Supervisory Council’s view, this performance was dictated mainly by temporary supply-side shocks.  As such, it does not change significantly our expectations on economic performance in the medium term.

Our forecasts, in their in baseline scenario, suggest that the economic growth pace will be improving in the next two years, enabling inflation to converge to target within this time horizon.  Against this backdrop, the current monetary policy stance is assessed as adequate.

Nevertheless, the Supervisory Council notes that downside risks have strengthened and their materialisation might dictate a further easing of the monetary policy stance.

Let me now present in greater detail the report and the underlying reasons for this decision.

In the third quarter, inflation averaged 1.4%, similar to that recorded in the previous quarter. The downward contribution of inflation of both non-food consumer goods and housing services was offset by the higher inflation of items in the category of services and durable consumer goods.

From the macroeconomic perspective, inflation has reflected the build-up of domestic inflationary pressures, and the fall of inflation rates in trading partner countries.  Looking ahead, the Bank of Albania deems that the increase in both wages and production costs, coupled with the stabilisation of the exchange rate, will create premises for inflation to gradually converge to target. 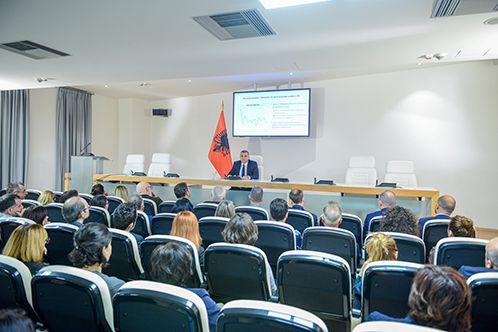 According to INSTAT data, the Albanian economy grew by 2.3% in the second quarter of 2019. Growth was driven by the expansion of public and private consumption, while net exports and investments were down.

Similar to the first quarter, the slowdown in the growth pace reflects the reduction in production and exports of electrical energy, the transitional effects of the closing down of games of chance and the entry into the final stage of works in a large energy project. These effects will continue to be present in the second half of the year. Thus, the economic growth pace, in this period, is expected to be comparable with that of the first half of year, but to accelerate in the next two years.

The economic activity expanded, reflecting the low cost for financing consumption and investment, the improved balance sheets of economic agents, and the increased revenues from tourism. The combination of monetary stimulus with fiscal consolidation and the strengthening of banking sector’s soundness have provided a favourable environment for growth.

In particular, the domestic financial environment appears stimulating, in response to the monetary policy stance implemented by the Bank of Albania.  The exchange rate appears relatively stabilised: the ALL/EUR exchange rate is closer to the equilibrium, while its fluctuations are dictated by seasonal factors.  Risk premiums in financial markets are low, while liquidity situation is good. Interest rates on loans, deposits and government's securities are close to minimum levels, thus bolstering credit growth and stimulating higher consumption and investments.

Credit to private sector grew 7.5% on average in the third quarter.  The acceleration of growth is attributable to both the expansion of demand and the improvement of bank credit supply. The latter reflects the on-going improvement of credit environment and the balance sheet of the banking sector, as shown by the drop of the non-performing loans ratio at 10.6%, as well as the increase of competition in the system, following the finalisation of consolidation in the banking sector.  Regarding composition, credit growth picked up pace on the back of a broad base, in terms of: currency structure; beneficiaries; and its destination.  This is another encouraging signal suggesting an expansion of credit in the future.

The fiscal policy continuous to maintain a consolidation trend, but its intensity has been lower.  This development reflects a faster increase of public expenditures vis-a-vis revenues, although budget deficit remains at low levels. The Bank of Albania continues to highlight the importance of strengthening public finances’ soundness, through maintaining the focus on budget deficit control and furthering reforms to improve public finance management.

The further expansion of aggregate demand has enabled a continuous increase of employment and decrease of the unemployment rate.  The unemployment rate stood at 11.5% in the second quarter, recording a historical minimum level of this indicator.  The increase of labour demand has created the premises for the rise of wages and production costs.  According to INSTAT data, the average wage in the economy was up by 4.5% in the second quarter, continuing the positive trend started since 2017.

The Bank of Albania deems that economic growth will remain in positive territory in the medium term ensuring an increasingly fuller utilisation of production capacities.

Projections in our baseline scenario suggest that the Albanian economy will return to equilibrium in the next year, creating premises for faster increase in wages and domestic production costs. Coupled with the expected stabilisation of the nominal exchange rate, they will help inflation converge to target in the second half of 2021.

The Supervisory Council deemed that the materialisation of forecasts in the baseline scenario would require maintaining the accommodative stance of the monetary policy in the medium term. This scenario foresees that the normalisation of the monetary policy will be gradual and - in any case - it will not start earlier than the second quarter of 2020.

On the other hand, the Supervisory Council continues to conclude that risks to the down side remain. These risks arise from both the external environment, with the euro area economy showing slowdown constantly, and the domestic environment, with the political tension continuing to induce uncertainties and potential shocks to the exchange rate may shift it farther away from the equilibrium. The Supervisory Council highlights that the materialisation of these risk shocks would require a revision on the easing side of the monetary policy stance.

Finally, in light of the current developments regarding the European Union integration process of the country, the Supervisory Council emphasises the need for maintaining the current anchors of the economic policies and continuing to accelerate further the structural reforms.