The purpose of the programme we are launching today is to support the Bank of Albania in the process of approximation with the EU central banking rules, procedures and standards. This is another step forward in the increasingly closer cooperation between the Bank of Albania, the European Central Bank (ECB), and the Eurosystem. I am delighted we have here today the Governor of the Central Bank of Kosovo and Vice Governor of the National Bank of Macedonia, as co-beneficiaries under this project. 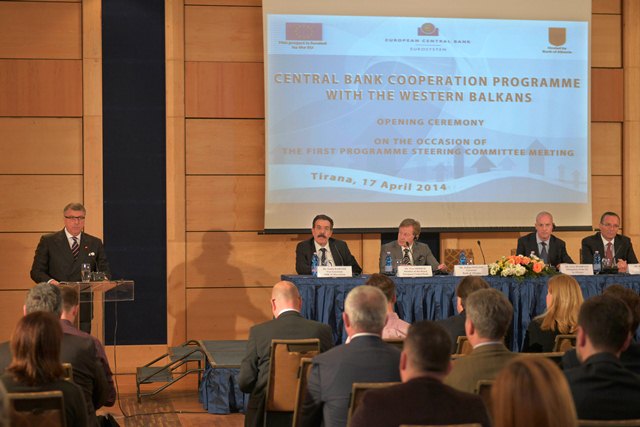 For the first time, information technology is also incorporated in the project scope, hence reflecting the impact of technology's evolution on central bank operational systems over the past decades.

The cooperation programme will be implemented with the support of experts from 11 central banks in the EU, with the ECB being the overall coordinator. Only two years ago, the Bank of Albania successfully concluded a twinning project with two of them: Banca d'Italia and Banque de France.

During the six-months of the project implementation period, central banks of the Eurosystem will provide expertise through training, conferences, seminars, study visits and support to strengthen administrative capacities, and regular technical missions.  This form of cooperation will aim at fostering the existing relations and building a broader network of cooperation between the Bank of Albania, central banks of the region and the Eurosystem.

The Project is funded by the European Commission, in the framework of support policies for the central banks of the Western Balkans, to promote macroeconomic and financial stability in the region. This form of technical assistance has been particularly successful in the past, creating strong institutional ties between the central banks of the Eurosystem and those of our region. The twinning is based on a detailed plan of action for achieving a series of concrete and measurable objectives.

This means that upon conclusion of the project, having benefited from the technical assistance, the Bank of Albania will be able to discharge its institutional duties and responsibilities in the relevant fields more effectively and more efficiently. I believe the main factor of success for such technical cooperation programmes is closely related to having clear goals and objectives, set jointly with our European partners.

Twinning agreements are an important instrument for ensuring Albania's compliance with EU legislation. This agreement is reached in a convenient time, taking into account that only two months from now, a decision will be made by the Council of the European Union on the candidate status with regard to Albania's EU membership.

The ultimate objective of this cooperation will go beyond the assistance; it will contribute to achieving high levels of professionalism, independence and transparency. It will also contribute to promoting the monetary and financial stability in Albania. Moreover, the assistance will be an impetus to the country's European integration, with special focus on compliance with criteria for legal and economic convergence with the European Union. This underlines, once again, the role of European integration as a driver to economic and social modernisation in our countries.
Today's agreement comes at a moment when the commitment of the European Central Bank to our region is focused not only on the field of technical cooperation, but also extends to the political one.

In addition to the close monitoring of the economy of Albania and other countries in our region, the European Central Bank plays an active role in the Vienna Initiative 2.0, which aims at identifying and mitigating systemic risks in the countries where European banks operate. This initiative is experimenting a new coordinating mechanism between the European Union and our region, bringing together representatives from parent banks, subsidiaries, home and host supervisory authorities, international financial institutions and the European Commission.

Moreover, the European Central Bank is assuming a new supervisory role for 130 systemic banks in the euro area, some of which operate in Albania or other countries of the region through their branches or subsidiaries. This role, which is expected to become functional in the field as of November this year, will be exercised in cooperation with national supervisory authorities and will have implications for Albania and other countries of the region, given the presence of euro area-based banks in our banking sectors.

With the establishment of the Single Supervisory Mechanism, the European Central Bank will become the home supervisor for a number of banks operating in Albania. In addition to improving the quality of banking supervision, this mechanism has the potential to facilitate cooperation between home and host countries, hence fostering cooperation between the European Central Bank and central banks in the region on financial stability.

Dear participants, the common challenges that lie ahead of us are numerous and should be solved within a short period of time.

On behalf of the Bank of Albania, I would like to assure you that we will continue to be in close contact with the European Central Bank and Eurosystem central banks, furthering our existing open and sincere communication.

Approximation with best EU central bank standards and practices is a crucial process for a central bank not only for the effective discharge of the duties, but also for the efficient and stable functioning of the financial system, and benefit of the economy, overall. I am confident that the implementation of this project will be characterised by the cooperative spirit between the Bank of Albania and central banks in the region, on the one hand, and the European Central Bank and Eurosystem, on the other.

I would like to conclude with a heart-felt appreciation and gratitude for all the stakeholders having an active role in the launching of this project:

We highly appreciate the Commission's assistance with regard to adopting the implementation of the European Union legislation and are seriously committed to continuing with the successful cooperation, established with the Delegation in the last twinning project.

In this context, I would like to reiterate my message that the road to European Union integration passes through regional integration. The financial system and central banks spearhead this process. We expect that public and private economic agents will determinedly follow this step we are taking. In my view, regional cooperation can and should serve as a forerunner to European integration.

Lastly, my special thanks and highest appreciation for Mr. Mersch for the fruitful cooperation between our institutions during his mandate as the Governor of the central bank of Luxembourg, and now as an Executive Board member of the European Central Bank and, above all, as a friend of ours.