On 12 September 2013, in Yerevan, Armenia, with the Governor of the People's Bank of China, Mr. Zhou XIAOCHUAN, we signed a SWAP agreement on the bilateral national currency exchange between the Republic of Albania and the People's Republic of China. 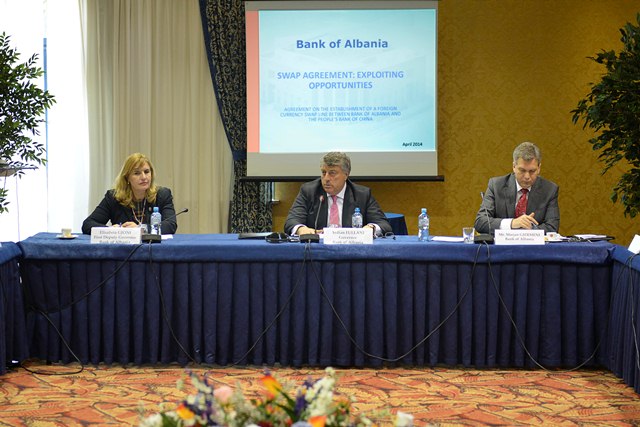 For the Bank of Albania, this important financial instrument will have a positive impact on widening and deepening of trade exchanges between the two countries. Most importantly, this agreement will have a positive impact on another aspect: expansion and deepening of the financial market in Albania. The economy, its agents, including financial institutions, are provided with an additional opportunity to contribute together to the quick recovery of economic activity, lending more to the economy, and the country's financial soundness.

The agreement is reached in the light of the considerably increasing share of the People's Republic of China in both the global economy and international financial system. The financial cooperation between the two central banks reconfirms the excellent relations between the two institutions, which culminated with the landmark visit of PBoC's Governor Zhou XIAOCHUAN to the Bank of Albania in 2011.

This cooperation materialises the increasing share of trade exchanges between Albania and China. Moreover, it precedes the potential increase in financial and capital transactions between the two countries.

Despite quantitative differences between the economy of Albania and the economy of China, we expect the trade exchanges with China to increase in the period ahead. Potentially, financial ties will also be strengthened. China is Albania's third trading partner, by origin of imports (behind Italy and Greece), and is an important station of our exports. In the last year, 5% of Albanian exports targeted the Chinese market and 6.7% of our imports originated from China.

Aware of the existence of these opportunities, we believe that an economy may be developed and well integrated, only if its markets are open, efficient, transparent and supervised. Our ambition to establish a solid financial infrastructure to support long-term and sustainable development for the country, with the ultimate goal to boost employment and enhance welfare, means necessarily becoming part of global markets, wherein the People's Republic of China is a key actor. For this purpose, we negotiated and signed a bilateral SWAP agreement on the bilateral exchange of respective national currencies.

In other words, the SWAP instrument implies an opportunity to exchange our national currency with the Chinese national currency, RENMINBI, to the amount equivalent of EUR 250 million, which may be set higher in the future. I would like to inform you that the Albanian banking system may have access in renminbi funds with the only goal to further boost trade and financial relations between the two countries.

This agreement is an important element of financial infrastructure that the Bank of Albania is establishing to attract more Chinese foreign direct investments in Albania. Market participants from both countries, especially Chinese investors, should feel secure about adequately meeting their needs for liquidity.

Dear bank representatives, your contribution is, therefore, indispensable. I would kindly advise for immediate measures to be taken to build a solid platform that would provide for higher volumes of trade and financial exchanges between you and your Chinese counterparties, and consequently between Albania and China. On our side, we will take all the necessary measures to facilitate the flow of funds in both directions. Furthermore, the Bank of Albania will transmit no additional costs to the banking system, which may arise from intermediation.

I would like to draw your attention on some of the elements of the agreement.

First, by easing lending terms, the agreement stimulates the deepening of trade relations between the two countries.  It enables the local banking system to access the renminbi. This is translated into a possibility to lend in this currency for Albanian importers or exporters that trade with their Chinese partners, providing, therefore, an impetus to exports.

Second, the agreement promotes Chinese foreign investments in Albania. The SWAP mechanism establishes the necessary basis and stimuli for Chinese investors to expand their activity, which would eventually bring about direct positive effects on the Albanian economy.

Third, the foreign currency SWAP agreement can substantially improve risk assessment of a country, because, through this mechanism, a central bank can easily access external foreign currency funds even in case of market shock.

Most essentially, the existence of a SWAP agreement implies a strong commitment on behalf of the central bank to ensure the system's financial stability, because it can be supported by other central banks in the event of shocks. Even this information in itself can send calming signals to financial markets.

Along the same lines, it is clearly understood that the efforts made by all of us for a successful implementation of this agreement bring about benefits to all the parties: the overall economy, the banking system, and the Bank of Albania.

The Bank of Albania regards the successful implementation of this agreement as a process that requires our constant commitment, which would yield tangible benefits to all of us. Deepening and expanding the financial market through this agreement will facilitate, also, the government's access to a new debt and funding market, providing for a new base of buyers and for diversifying the government's funding sources.

I would like to invite you, following the presentation, to share your views and opinions in an open and fruitful discussion about the appropriate ways to implement the agreement.