Today, on 19 December 2019, a ceremony was organised at the Bank of Albania to launch the Twinning Project “Enhancing Bank of Albania’s alignment with EU Acquis”. 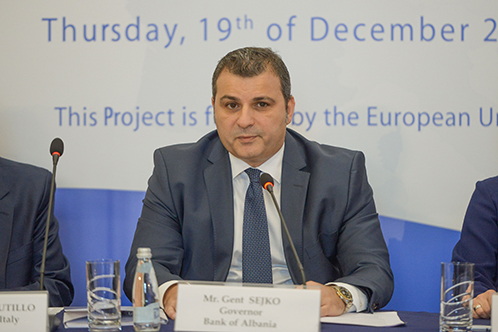 The project is implemented with funds allocated and monitored by the European Union, in the framework of the IPA 2015 EU funds, following recommendations from a program designed and led by the European Central Bank. 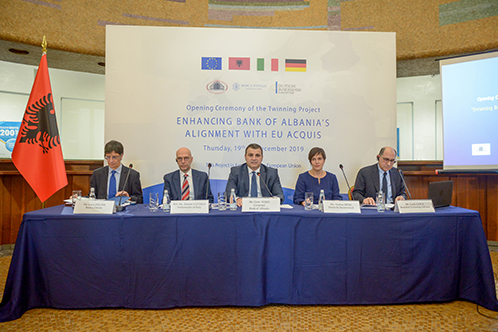 The project will be implemented by the Bank of Albania, Banka d’ Italia and Deutsche Bundesbank. Meanwhile, certain components will be implemented by Banque de France and National Bank of Romania. Its primary goal is the improvement of work practices at the Bank of Albania and their alignment with the practices of the European System of Central Banks (ESCB). It aims at bringing the EU expertise and the experience of central banks of two EU founder countries to contribute to the Albanian banking system, thus helping the economic integration of Albania with the EU.

The launching ceremony started with opening addresses by the Governor of the Bank of Albania, Mr Gent Sejko, and the Ambassador of Italy, H.E. Alberto Cutillo. 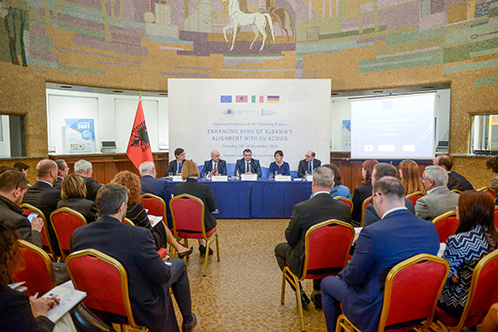 At the beginning, Governor Sejko stated: “Hoping that in the spring of 2020 we will see a green light for the opening of accession negotiations for Albania, I would like to reassure you of Bank of Albania’s commitment to fulfilling priorities arising from the European integration process”.

Mr Sejko added that undertaking such projects clearly emphasises the mutual engagement of the EU and Albania with regard to deepening integration processes of our country, with the main objective the approximation of the legal, regulatory and operational frameworks to that of the European System of Central Banks. 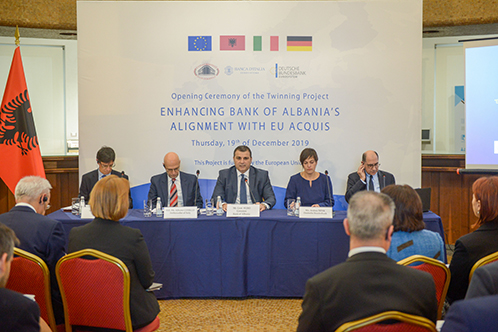 Be expressing the willingness to successfully implement the project, the Governor introduced the work areas this project will focus on. It involves eight departments at the Bank of Albania and will address important issues, pooled as: banking supervision and financial stability; monetary policy and statistics; internal audit; payment systems; and other central banking functions such as human resources and European integration.

Concluding the Governor thanked the European Commission, for the support to ensure funding for this project, the EU Delegation to Albania, the General Directorate for Financing and Contracting for the EU projects and other donors, Banka d’ Italia, Deutche Bundesbank, National Bank of Romania and Banque de France for their support and involvement in this project as well as the Bank of Albania staff.

The Ambassador of the Republic of Italy, H.E. Alberto Cutillo commended the Bank of Albania as one of the key institutions in Albania, emphasized the importance of this project for the further development of its institutional capacities. Such institutions help in Albania’s approximation to European standards and acceleration of European integration processes of the country.

This project will be implemented for a one-year period and a Resident Twinning Advisor will be instated at the Bank of Albania.  Also, 110 missions and 12 study visits are foreseen to take place, in which experts from the above-mentioned banks will share their experiences.