On 25 March 2018, the Money Week 2019 was launched at the Bank of Albania. With diverse educational activities for pupils and students, the Week is a global money celebration, which aims to raise the awareness among children and youth to be responsible citizens in the future, able to take well-informed financial decisions.

This is the sixth year that the Bank of Albania and the Albanian Association of Banks, with the support of the Ministry of Education, Sports and Youth, and other partners joins the celebration of this Week, aiming always to provide a rather interesting and attracting program to involve considerable number of pupils and students in educational activities.

Financial education, more specifically, how to manage, to save money, and how to earn from entrepreneurship, and build foundations for their future will be at the focus of these activities.   The activities will consist of lectures, competitions, visits to the Museum of the Bank of Albania and commercial banks and open classes. 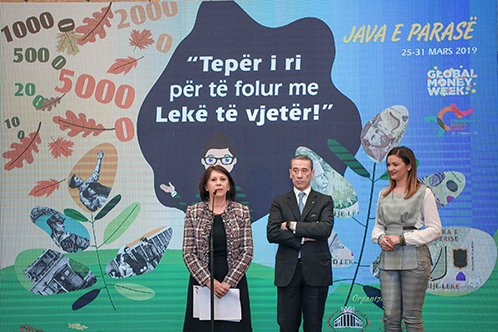 This year, Bank of Albania decided to have a motto which is related to the history of the wrong notion in reading lek. The motto for this year is: “Too young to speak in old lek!” aims to extend longer than the Money Week, focusing in the education of the society in the correct use of the term “lek” day-to-day financial interactions.

The First Deputy Governor of the Bank of Albania, Ms  Luljeta Minxhozi, the Deputy Minister of Education, Youth and Sports, Ms Lorena Haxhiu, and the Chairman of the Albanian Association of Banks, Mr  Silvio Pedrazzi addressed the ceremony.

In her address, Ms Minxhozi highlighted that year 2019 marks the 12th year the Bank of Albania engages in financial education efforts for the public in general, with a particular focus on the young generation.

The First Deputy Governor added that this commitment is fully in line with the spirit of transparency toward the public and raising its awareness on economic and financial issues, which have an impact on the day-to-day living for each and every one of us. In this framework, the Money Week best summarises all our efforts in this field.

Ms Minxhozi also stressed the motto of the activity “Too young to speak in old lek”!, addressing a specific issue for Albania, as it is the use for more than five decades, of the outdated terms “new lek” - “old lek” in our day-to-day financial interactions.

Concluding, Ms Minxhozi thanked the participants of the contests, and exhort them, as part of the young generation, to try to speak correctly, thus helping to eliminate such outdated terminology.

The ceremony continued with the awards for the winners of the three contests organized by the Bank of Albania and the Albanian Association of Banks on the occasion of the Money Week, with the participation of around 340 pupils from 40 primary and high schools.

The first contest organised in the framework of this Week was dedicated to “Learn. Save. Earn.” and the Bank of Albania invited sixth graders of 9-year schools to participate with their original projects. 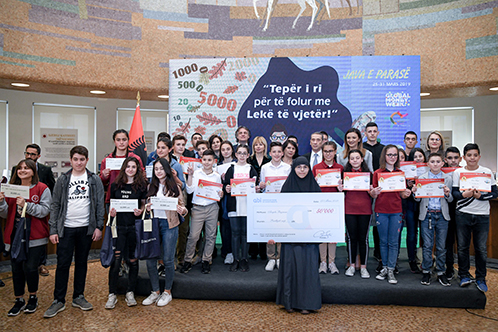 The second contest was with photo-montages on: “Too young to speak in old lek: an added 0 makes the difference”, with the participation of the ninth graders of 9-year schools.

The third competition was on the best video, and high school students were invited to present their original messages on “Too young to speak in old lek”.