PRESS RELEASE
Speech by Mr. Ardian Fullani, Governor of the Bank of Albania, at the high-level conference "On international central bank cooperation before, during and after the crisis", hosted by the European Central Bank

It is an honor for me to participate in this important conference and I want to thank the organizers for inviting me. In my speech I will focus on how the recent financial crisis has changed the central bank work with respect to the adoption of macro-prudential policy and its relationship with monetary policy. Then I will share some thoughts on the experience of SEE countries during the crisis, and highlight some of the challenges they face given the recent economic, financial and regulatory developments in the EU. 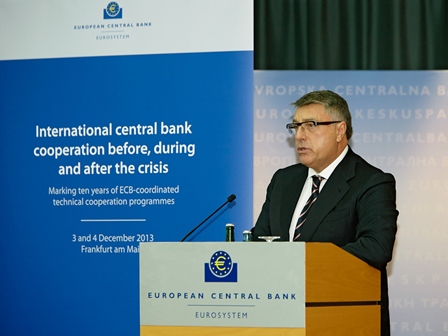 The crisis we are going through, being so profound and lasting, will leave its mark on economics in general, and central banking in particular. Up until the Great Recession, monetary policy was living in a world that we may call the inflation targeting era. In many ways inflation targeting made the central banks job relatively simple, as long as it followed the policy correctly. The Central Bank, seen by the public as an independent institution, had to credibly commit to an explicit inflation target, in order to anchor mid-term inflation expectations. Self-fulfilling expectations from economic agents and price setters would, in turn, help deliver the objectives of monetary policy. Economists believed that by stabilizing consumer prices, financial assets would also behave in a stable and predictable way. The crisis painfully reminds us that behavior in financial markets is not always rational and lack of confidence in the markets can spiral out of control, sending shockwaves throughout the economy. Escalating asset prices and their sudden burst affected significantly the behavior and balance sheets of the economic agents and challenged the stability of the financial system. In this respect, the concept of financial stability was seen as a byproduct of monetary stability.

Limiting systemic risk, both in its time and structural dimension, is the objective of macro-prudential policy. In the last 3 years, there has been significant progress in the identification of several instruments designed:

These measures may have countercyclical nature and could apply to financial institutions based on their systemic importance.

These standards require building an institutional framework with clear identification of the authority /authorities that will have macro-prudential powers, in accordance with the structure and level of market development. Central bank appears to be better positioned than other authorities to perform the macro-prudential role. In addition to its exclusive responsibility on formulating and implementing monetary policy, central bank has other advantages related with:

Nowadays it is widely accepted that there has been huge progress worldwide in ensuring legal and operational independence of the central bank and this is another important reason why it can be entrusted with macro-prudential policy.

In order to correctly define the macro-prudential function of the central bank, it is important to establish the right relationship with monetary policy. This can be done with the understanding that both policies, if designed and implemented properly, complement each other. Monetary policy can still pursue its course following low inflationary pressures, while the macro-prudential measures can be used to address early risks developing under a low interest rate environment. On the other hand, macro-prudential measures can also be used to mitigate risks from incoming capital flows, in an environment of relatively high real interest rates.

Instances of conflict among the two policies should not be neglected though. These instances can be more pronounced if the objectives of the two policies are wrongly defined in a certain financial situation, or respective tools are used out of their scope. For this reason, I believe that it might be helpful to uphold the monetary policy as the primary objective of the central bank. Stabilizing inflation should be something that central bankers may be proud of, something that we should cherish and continue to strive for. But we must recognize that financial stability issues and related macro-prudential measures have to gain significantly more grounds in central bank discussions and decisions. Clearly, the course of the monetary policy will continue to be extensively discussed in the future, based on our improved understanding of the role of asset prices and financial frictions. Incorporating financial stability objectives with the inflation targeting regime we have considered in Albania as an opportunity to understand and address economic developments and potential macro-financial risks, in order to preserve long-run economic stability.

While the mandate on macro-prudential policy and its tools must be clear, one has to recognize that it can have wider effects in financial system and the real economy. For this reason, discussions on macro-prudential policy and measures must involve other authorities, including the fiscal one. Many countries have now established an inter-institutional entity with soft or hard powers in designing and implementing macro-prudential policy to mitigate systemic risk.  The role of the central bank in these inter-institutional entities will reflect their legislation and tradition, and independence objective. Although central banks may not always chair such entities, central banks play a critical role in underpinning their functioning given the information and expertise they provide.

How have such policies developed in the South Eastern Europe (SEE) region?

In spite of solid growth in the run up to it, the global crisis found SEE in a vulnerable position. To a large extent, its growth model was based on encouraging domestic absorption which in turn was partly financed through external borrowing. Financial inflows were channeled in SEE economies largely through EU bank subsidiaries. In SEE, they encouraged investment in real estate and services sectors and were reflected in large current account deficits. External competitiveness and structural reforms slipped gradually through the policymakers agenda, while fiscal positions were allowed to deteriorate and financial safety nets were weak.

As a result, when the crisis hit SEE faced both a structural and a cyclical problem. The overall economic structure was not competitive while growth declined as external demand collapsed and domestic demand suffered from higher uncertainties, higher risk premium and lack of funding. On the financial side, our economies suffered as foreign banks deleveraged and reduced their exposure to SEE. On top of this, several countries faced high vulnerabilities in the financial system, as the NPLs grew rapidly on a combination of weak growth and FX currency loans to un-hedged borrowers.

This picture is of course a generalization. Different countries have had different experiences, depending from their initial conditions and policy responses. However, the crisis exposed several weaknesses of this economic model. At the same time, to the extent that there are differences among countries, we can draw more conclusions from our experience:

Several issues remain to be solved. SEE economies have rightly chosen integration in EU as their main goal. It helps to anchor their political systems, their structural reforms, their legal and regulatory environment and their macroeconomic and financial policies. However, the economic growth model has to change. The main focus of national authorities in SEE should be to facilitate the allocation of capital to more productive sectors, by providing the right incentives structural reforms, legal environment, tax policies, and economic stability.

In the financial system of these countries, dominated by banks, the deleveraging process is undergoing under the pressure of the deteriorating loan quality. Credit is made scarce as banks have become risk averse and hesitate to lend to potential borrowers by tightening lending terms. Hence, real sector agents, particularly firms operating in ailing sectors of the economy, are facing surmounting short-term financing difficulties and have lost sight of their future objectives. The process of restructuring in these firms has to find ways for their business to change and become efficient, in order to survive and restart growth. Finance and knowhow is particularly important during such restructuring phase.

What role has the financial system in this process? We have to be clear on two issues: (1) we have constructed a financial system and pursued a financial integration strategy based on banks. In fact, they comprise more than 90% of the financial system throughout the region. We think this model is successful and with some minor revisions should serve our economies in the future. For one, foreign banks bring expertise and mostly stability to the financial system. But, recent experience has softened this argument. (2) Banks should be the main vehicle of financial inflow. As converging economies SEE is expected to run current account deficits. As such, it is a capital hungry region which international banks should intermediate. A new business model relying purely on domestically generated deposits is a wrong answer to the previous extreme of huge capital inflows. A more happy medium should be sought, one based on careful and sustainable inflow of funds.

How is the Single Supervisory Mechanism going to affect the work of the central banks in the region?

I believe the SSM mechanism is going to have a positive impact on central bank (and regulatory authorities) in the region discharging their responsibilities with regard to supervision and macro-prudential policies. Regulators in the region will now talk to a single home supervisor, and this is expected to bring more attention to their supervisory concerns. This process could be strengthened further if the central banks in the region improve their own cooperation and are able to identify common position in their communication with the European Central Bank. This could address better the concern that the single supervisor could be more distant to worries of regulators coming from small countries in the region.

Being able to cooperate with a single home supervisor, will be instrumental in achieving faster progress in the process of regulatory convergence, and establish a more level playing field for financial institutions in the region. This is something that is being closely guided by the Vienna II Initiative. In addition to preparing implementation of various regulatory standards related with countercyclical macro-prudential tools, with particular short term importance is the issue linked with recognition and the treatment of the NPL.

In the recent past, some of the countries in the region have been affected by the deleveraging process started in the EU financial system. This was mostly felt during 2012, following the higher capital requirements associated with EBA stress test of November 2011 and relevant steps taken by national home authorities to comply with capital requirements. Next in line is the Asset Quality Review by the ECB. Our hope and belief is that this time, concerns of the SEE countries regarding potential further deleveraging, will be considered more carefully and more specifically, to avoid further potential deleveraging. Let me reiterate that the economies in our region currently rely heavily in bank financing and there is a growing need to make credit flow again in the economy.

To conclude, allow me to point out the importance of establishing a sound framework for macro-prudential policy, both in terms of tools and institutional approach, in order to deal effectively and timely with prevention of systemic risk. They should be accompanied however, by measures related with the strengthening of crisis management framework. If designed properly, macro-prudential policy should avoid any conflict with monetary policy, and instead should complement it appropriately. Countries in the SEE should benefit from synergies related with the adoption of the Single Supervisory Mechanism. These benefits could be larger if we manage to strengthen our regional cooperation. We are still concerned with potential further deleveraging following the forthcoming Asset Quality Review process and we hope that ECB and other authorities in the Eurozone and EU, could design it to limit these impact in maximum.

Thank you very much for your attention!