Today, on 5 February 2020, the Supervisory Council of the Bank of Albania reviewed and approved the Quarterly Monetary Policy Report.

The new information analysed in this Report suggests that the economic activity in Albania was hit by the earthquake of November 26th, 2019, but this shock has not compromised the medium-and long-term trend of development. The consequences of the earthquake are expected to have a slowdown resultant effect on both the economic growth and inflation. However, this slowdown is expected to be temporary and concentrated during 2020.

The updating of our baseline scenario suggests that the growth pace will accelerate in the medium term. This acceleration is expected to bring the economy to equilibrium and inflation to target by 2021. Based on these considerations, the Supervisory Council deemed that the current monetary stimulus remains adequate.

In parallel with the baseline scenario, the Supervisory Council concludes that downside risks have increased. Their materialisation might dictate a further easing of the monetary policy stance.

Let me now present in greater detail the report and the underlying reasons for this decision. 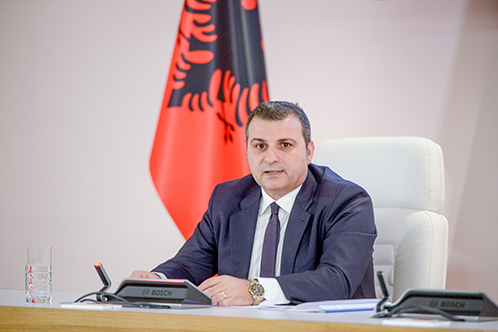 In the fourth quarter, inflation averaged 1.3%, down from the previous quarter, and remaining below our target of 3%. The decline in the inflation rate reflected the slower increase of food prices. This phenomenon is particularly present in December. While, prices of other basket items recorded less fluctuations.

The decelerating effect of these factors will be gradually reduced in the medium term.

According to INSTAT data, the Albanian economy recorded an annual growth of 3.8% in the third quarter, accelerating from the first half of year, and in the upper side of our expectations. In sectoral terms, this acceleration was driven by the positive tourist season and the reduction of the negative effect originating from the fall in production of electrical energy. In terms of aggregate demand, it reflected the faster growth of consumption and exports, while private investments were down.

The expansion of aggregate demand is combined with the gradual improvement of the country’s cyclical position in the last four years. In response to these trends, the unemployment rate stood at 11.4% in the third quarter, the historical lowest rate recorded in Albania, while the average wage recorded an annual growth of 3.7%.

Nevertheless, the rise of wages and production costs remains insufficient for inflation to converge to target, by showing that the Albanian economy is still far of the fuller utilisation of its production capacities. 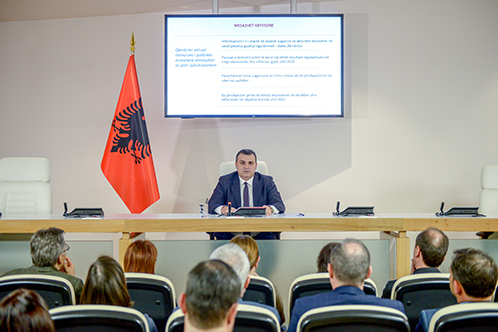 The information available on the economic developments in the fourth quarter is incomplete. Analysis of preliminary data suggests that the earthquake of November 26th, 2019, had a negative impact on the economic growth pace. This effect is expected to continue in 2020 as well. The damages to firms’ sites, the increase of uncertainty and the re-orientation of expenditures to repair the damages, are expected materialise in the slowdown of the production in the affected sectors, mainly in tourism. On the other side, the re-construction process is expected to provide a positive effect on the growth, but not simultaneously with the negative shocks, and not sufficiently strong to compensate their effects.

Judging on the available information and global experience, the Bank of Albania deems that the earthquake has not damaged the medium-term and long-term basis of the country growth and development.

The reconstruction process and the normalisation of the situation will help to regenerate the production capacities and a faster expansion of the aggregate demand in 2021 and further. The rise in employment and wages will support the expansion of family consumption; the rise of utilisation of production capacities will increase the demand for investments; while Albanian exports will continue to benefit from the development of tourism sector.

In parallel, the overall financial environment appears favourable. The financial markets are relatively calm, financing costs are low, while the exchange rate appears more stable. Our accommodative monetary policy stance, the restructuring of banking sector and the improvement of its balance sheet have boosted a more rapid credit growth. The credit portfolio grew by 7.8% on average in the fourth quarter, driven by the expansion of credit to enterprises and of credit in lek. The structure of credit growth provides encouraging signals, both on its impact on economic growth and on credit portfolio quality in the long term. At the same time, non-performing loans ratio dropped at 8.4% in December, by reflecting the concrete measures implemented by the Bank of Albania for their reduction and the improvement of both economic environment and financial situation of borrowers.

Our baseline projection, compared with the previous round, shows a notable shift to the down side for 2020, but it maintains the same trajectories for 2021 and on. These forecasts are surrounded by a heightened level of uncertainty, linked primarily to the inability of precisely forecasting the impact of the earthquake on the economic growth. Also, the balance of risks around the central forecast is tilted to the down side.

- Keep the policy rate unchanged at the present level 1.00%; and,

-Keep the overnight deposit and overnight lending rates, unchanged at 0.1% and 1.9%, respectively.

The Supervisory Council deems that the fulfilment of our objective - price stability - would require maintaining the accommodative stance of the monetary policy in the medium term.

Addressing the factors that can lead to these risks materialise is in the remit of the central and local governments. However, if they do materialise, the monetary policy stance would need to be revised on the easing side.

Finally, the Supervisory Council emphasises the need for further accelerating the structural reforms, as the best instrument for improving sustainable and long-term growth in Albania, and maintaining the focus of the economic policies on the long-term stability of the country.