PRESS RELEASE
Governor Sejko: Statement at the joint press conference with the IMF Mission Chief for Albania and the Albanian Minister of Finance, 20 November 2018

On Article IV discussions with the IMF Mission

In the last two weeks we have been engaged in discussions with the IMF Mission, which visited Albania in the framework of periodic Article IV consultations.

Such discussions focus on the current performance of the economy and financial markets in Albania, their outlook, as well as the adequate economic policies and necessary structural reforms that should be implemented and monitored with a view to guaranteeing sustainable development for the country. 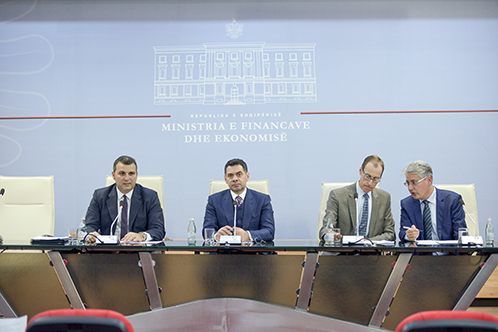 I must say, with pleasure, that we share similar views on development trends, challenges that lie ahead, and the respective measures for tackling them.

Let me now present in brief the opinion of the Bank of Albania on these issues.

Economic growth has contributed to the overall improvement of Albania's economic and financial balances. In line with our previous statements, the following is notable:

Such analyses show that the foundations of the country's development remain relatively solid.  The analysis is reflected also in our projections. In the baseline scenario, these projections suggest that economic growth will continue in the medium-term horizon, production capacities will be utilised in fuller terms, and inflation will converge to the central bank target by 2020.

These projections are conditioned by a series of factors.

In accordance with these projections, the Bank of Albania deems that the current policy mix is adequate. The fiscal policy is and should remain committed to lowering the debt level and diminishing fiscal vulnerabilities. On the other hand, the monetary policy should maintain the accommodative stance. The convergence of inflation toward the target implies that the intensity of the monetary stimulus will be diminishing over the medium-term; yet, it does not imply a change in the nature of the monetary policy. Lastly, our philosophy as well as the supervisory and regulatory measures will continue to balance the needs for promoting development vis-à-vis guaranteeing the stability of the banking sector and safeguarding the savings of Albanian citizens.

But, our duties as policy makers go further than this. With a view to accelerating the pace of development and enhancing its sustainability, the structural reform agenda needs to continue.

First, the sustainable and long-term development of Albania's economy requires further improvement of our financial system.

In this regard, the Bank of Albania and public authorities should continue working to improve the credit environment, among other things, by strengthening contract enforcement, implementing new legal and sublegal procedures related to collateral execution, and completion of the remaining duties under the national programme for the reduction of non-performing loans. The signing of a Memorandum of Cooperation in the field of banking supervision, between the European Central Bank and the Bank of Albania, will facilitate the exchange of information and enhance the security of European banking groups that operate in Albania. Likewise, the completion of the restructuring and consolidation process of the banking sector, which has had and will continue to have our attention, is an additional guarantee in this regard. In parallel, the development of other segments of the capital markets should be further encouraged, yet with prudence, so as to avoid missteps, and in harmony with supervisory and regulatory norms and standards for the banking sector.

Second, the structural reform agenda should be accelerated.

The second phase of this reform should aim at improving the education and know-how of the labour force, creating a legal, political, administrative and fiscal environment that attracts foreign developments and encourages domestic ones, and increasing the integration of Albania's economy with the regional and European development infrastructure.

Third, the opening of accession negotiations with the EU should be viewed as a primary instrument for the advancement of Albania's development.

The Bank of Albania judges that the fulfilment of the criteria for opening accession negotiations and the rigorous implementation of reforms that this process imposes should be the focus of the entire political spectrum in Albania.