Welcome to the last press conference for 2018.

Today, the Supervisory Council was briefed and discussed on the latest economic and financial developments in Albania, the outlook, the adequacy of the monetary policy stance, and other issues related to the organisation and management of the Bank of Albania.

In the following, I will present a statement of the Supervisory Council on the monetary policy decision. 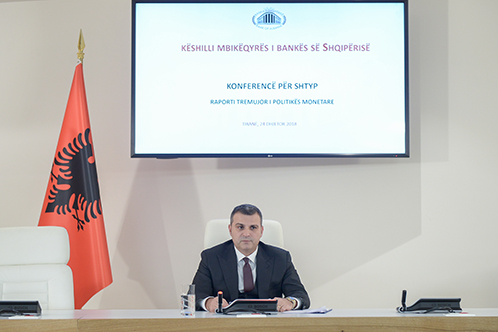 Although available information is partial and indirect, the analysed data suggest that economic activity in Albania trended upward in 2018 H2. Economic growth is reflected in better utilisation of production capacities, as shown in an increase in employment, a decrease in the unemployment rate and a build-up of domestic inflationary pressures.

This performance has been overall in line with our previous expectations and does not bring about significant changes to our projections. Among other things, it evidences the positive impact of the accommodative monetary policy of the Bank of Albania and suggests that the current stance of this policy is adequate for both ensuring economic growth rates in line with the production potential of the country and guaranteeing the convergence of inflation toward the target within 2020.

From a sectorial perspective, expansion of economic activity appears to reflect, mainly, growth in industrial production and services. Nonetheless, available data show that electricity production's pace of growth has been slowing down in the third quarter, suggesting a slight deceleration of the economic growth rate for 2018 H2.

From the perspective of aggregate demand, expansion of consumption and private investments and growth in Albanian exports appeared to have continued to underpin economic growth. On the other hand, fiscal policy consolidation in the third quarter and in most of the fourth quarter has been stronger than expected, leading to a slower-than-projected contribution to economic growth by public expenditures.

In balance, the overall context of economic and financial developments in Albania remains positive.

The Albanian economy continued to benefit from the positive performance of our main trading partner, the euro area, from improvement in the financial balances of households and firms, and from fiscal consolidation, which has reduced the risk premia in domestic financial markets.

In parallel to these factors, economic activity expanded, supported by the accommodative monetary policy of the Bank of Albania. The monetary policy has been transmitted through a low policy rate, the continuous injection of liquidity into the domestic financial market, the forward guidance instrument, and selective interventions in the foreign exchange market during the summer period.

Our monetary stimulus has created a liquid financial environment with low interest rates, and has mitigated the effect of appreciation pressures on the exchange rate. Low interest rates have supported the expansion of credit: excluding the effect of the exchange rate and the lost loan write off, credit to the private sector increased by 4.9% and 4.5% in the third quarter and in the first two months of the fourth quarter, respectively. Low interest rates have also helped in restructuring loans, easing debt servicing costs and improving the stability of the financial system. The NPL ratio dropped to 12.7% in November, illustrating continuous improvement in the soundness of the banking sector. Lastly, temporary intervention in the foreign exchange markets has reduced misbalances in the supply and demand for foreign currency, calming the foreign exchange market and reducing exchange rate deviations from the levels suggested by fundamental factors.

The growth of credit, the easing of borrowers’ financial burden, and reduction of exchange rate volatilities have encouraged consumption, investments, economic growth and employment gains, thus creating premises for the return of inflation to target in the medium-term horizon.

Inflation stood at 1.8% in November, downward from the level registered in the third quarter and in October. In line with our previous expectations, this fall reflects a downward effect from the appreciation of the exchange rate on imported inflation. Our analyses suggest that this effect is expected to be transitory and will not affect the convergence of inflation to the target in medium term.

The update of projections in accordance with the baseline scenario confirmed our previous expectations for the return of the economy to equilibrium in the second half of the next year and of inflation to target in 2020. This performance is expected to be supported by the positive performance of the euro area and other trading and financial partners, the stimulating monetary and financial environment in Albania and the calming of exchange rate appreciation pressures.

In parallel, the Supervisory Council deemed that the balance of risks remains tilted to the downside. These risks are related to both potential shocks that may come from the external environment, and the speed at which the business climate and lending in Albania have improved.

Judging on the above, the Supervisory Council of the Bank of Albania deemed that the current monetary policy stance remains adequate.

Taking into account these circumstances, the Supervisory Council decided to:

Maintaining the direction and intensity of the monetary stimulus boosts aggregate demand growth, contributing to growth of employment, increase of wages and build-up of domestic inflationary pressures.

In accordance with projections of the baseline scenario, and based on the available information, the Supervisory Council judged that the increase in the policy rate will not resume before the second quarter of 2019.