PRESS RELEASE
Governor Sejko presents BoA’s opinion on the Draft Budget 2019 to the Parliamentary Committee on Economy and Finance, 19 November 2018

Honourable Members of the Committee,

First of all, thank you for the invitation and the opportunity to present the opinion of the Bank of Albania on the Draft Budget 2019.

I would like to emphasise that the drafting and approval of this Draft are among the most important moments in the economic life of the country. Therefore, we have always welcomed the constructive and professional discussion on the objectives, policies, instruments and projections, which, overall combined, determine a Draft Budget. 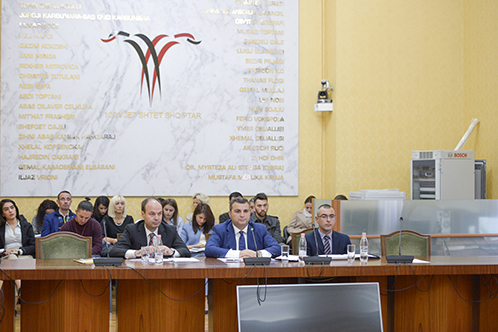 In compliance with the institutional mandate of the Bank of Albania, our opinion will focus on the correlation between the performance of the economy and the fiscal policy, as elaborated in the Draft. Next, I will present our judgement on the impact of the borrowing strategy and public debt management on the Albanian financial market. Then I will provide an overall analysis of Albania’s public finances stability indicators. Lastly, I will present some suggestions of the Bank of Albania for the period ahead.

Honourable Members of the Committee,

Detailing the governing policies in financial terms, the state budget should not be based simply and solely on the economic and financial reality of a country, but be viewed as an instrument for improving it. Let me start the presentation of Bank of Albania’s assessment on the domestic economic and financial developments and the relevant policies to support them.

As we have also emphasized in our public communications, the Bank of Albania judges that the Albanian economy is set on a positive development trend.

The growth pace accelerated in the first three quarters of the current year. In part, the pace accelerated also as a result of the favourable hydric situation. In addition, employment increased and the unemployment rate fell, whereas the financial balance sheets of households, enterprises and the banking sector continue to improve. Likewise, the main indicators of the macroeconomic balances have improved:

All these indicators suggest that the cyclical position of the Albanian economy is improving. In other words, the economy is moving gradually towards equilibrium.

The Bank of Albania deems that the outlook on economic growth remain positive. The sources of economic growth appear solid and diversified, in terms of both aggregate demand and production sectors. In parallel, the external environment remains overall favourable, although uncertainties and risks surrounding it remain present and are not entirely negligible.

Yet, the positive development trend would not have been possible without a proper mix of economic policies, i.e., the combination of the accommodative monetary policy with the consolidating fiscal policy. One the one hand, the monetary stimulus has enabled the lowering of interest rates; the boosting of crediting; and the easing of debt servicing costs. In turn, it triggered the expansion of aggregate demand and underpinned economic growth and employment increase. On the other hand, due to the fiscal consolidation has enabled the lowering of risk premia and of borrowing costs for both the private and public sectors, and has expanded the space for withstanding potential shocks in the future.

In our opinion, fiscal consolidation should remain the main anchor in formulating the fiscal policy and the main guideline for implementing the Budget in the future.

The Bank of Albania finds that the presented Draft Budget accomplishes this mission. In concrete terms, the Budget envisages:

Moreover, the Bank of Albania deems that the Draft Budget 2019 is based on acceptable economic and fiscal projections. In particular, the projected level of revenues is on the up side our projections, driven also by the projections for an improvement in the revenue collection process, but the differences in projections appear minor and have immaterial effects on the Budget.

Based on the above, we deem that the Draft Budget 2019 maintains the fiscal consolidation trend, remaining harmonised with the direction and intensity of the monetary stimulus and contributing to the reduction of the risk premia and the costs of financing in the economy.

Beyond the stabilising effect of the fiscal policy, and analysing the Draft Budget, along with the accompanying fiscal package, from the long-term perspective of the country's development, the Bank of Albania finds the following:

I will now focus on developments in financial markets and their interaction with the level and strategy of public debt financing.

In view of the two-fold objectives that the borrowing and debt administration strategy should have - to reduce the cost of financing and minimising the liquidity risk and debt volatility - the Bank of Albania deems that this financing plan is reasonable.

The borrowing strategy should continue to be oriented toward extending the average term of the debt, which reduces the risk of refinancing, and reducing the share of variable cost instruments, which decreases the volatility and increases the ability to project public debt servicing flows. In parallel, in the medium and long term, the public debt management should focus more on:

The need to improve debt management structures and strategies becomes even more pressing if we take into account two important trends:

Honourable MPs, the following sections presents a summary of Bank of Albania's opinion on the long-term sustainability of public finances.

The organic budget law sets out specific clauses, aimed at disciplining the fiscal policy with regard to efficiency in the use of funds and safeguarding and enhancing the long-term health of public finances.

The Bank of Albania finds that these clauses have been complied with. The projections for the gross domestic product are, in nominal terms, within the latest available projections of the IMF. Also, the trajectory of the public debt is downward, public investments are higher than the value of the budget deficit and the draft envisages contingencies for withstanding adverse volatilities in the exchange rate and interest rates.

Also, a table of medium-term projections for public finances is attached to the Draft Budget. The table suggests fiscal consolidation will continue in the medium term horizon.

From this perspective, the Bank of Albania finds that the deficit of social security schemes, health insurance schemes and other social securities is at around 4.6% of the GDP or 2.6 times higher than the overall budget deficit. Analysed in greater detail, the deficit of the social security scheme, also known as the pension scheme, is expected to be at around 1.5% of the GDP, within the projections made in the reform of this system, and set on a downward trend. On the other hand, the deficit of the other schemes is more stable. Beyond the counter-cyclicality of various elements in these schemes, the Bank of Albania judges that spaces should be considered for further reducing their structural deficit.

The Draft Budget 2019 introduces a novelty in terms of explicitly assessing the potential risks to the realisation of the budget. The Bank of Albania welcomes this novelty and encourages that it become an integral part of annual and medium-term budget plans.

With regard to these risk scenarios, the Bank of Albania has the following comments:

In the following section, I will present some additional suggestions by the Bank of Albania.

4. Some suggestions on enhancing the effectiveness and stability of public finance:

On the pace of fiscal consolidation in the medium term

Improvement of the cyclical position of the country, that is the fuller utilisation of production capacities of the economy, eases the burden of fiscal consolidation. The Bank of Albania suggests that, in accordance with the degree and pace of economic improvement, the possibility of accelerating the pace of fiscal consolidation in the medium term be taken into account. Such acceleration would contribute to accommodating the expected rise in the costs of debt servicing in the medium term, and increase the space for withstanding potential negative shocks in the medium and long term.

On the tax system

The Bank of Albania deems that, beyond the stability of the tax regime, another desired feature of the tax policies is the simplification of the system, with regard to reducing tax exemptions. Except for the case of protecting the people in need, a simple tax system eases the burden on tax system administration and tends to improve the efficiency in the allocation of resources in the economy.

On the further enrichment of the fiscal rule

The inclusion of clauses on fiscal accountability in the Organic Budget Law was a great step forward as concerns legal sanctioning of the fiscal stability. Meanwhile, taking advantage of the time and the accumulated experience, the Bank of Albania would suggest enriching the Law with the following clauses:

The realisation of budget expenditures throughout the year continues to show more concentration in the fourth quarter. This phenomenon - repeated and dictated to a larger extent by the uneven realisation of public investments- creates unnecessary fluctuations throughout the year in liquidity indicators and interest rates in the domestic financial market. It also tends to render more difficult the control of expenditures and compliance with budget limitations, and reduce their effectiveness.

On the management of Public - Private Partnership programmes

Further to previous comments on such programmes, I would like to emphasise once again the need for: constantly improving professional capacities of units responsible for the assessment, contracting and monitoring of these projects, especially with regard to the legal and financial aspects. Also, the contracted PPPs in the field of public investments should be in conformity with the strategic medium and long-term programme of investments, as identified in the development programmes of the country.