Today, on 6 October 2021, the Supervisory Council of the Bank of Albania reviewed and approved the Intermediate Monetary Policy Report.

The new information analysed in this Report shows a fast recovery of the economic activity in Albania, coupled with pressures on an increase of inflation in Albania and globally. On one side, reduction of restrictions, improvement of households and enterprises’ confidence, and the positive effects of economic stimulus, drove to a broad-base growth of the demand for goods and services. On the other side, temporary supply-demand imbalances in international markets have raised additional shocks on inflation, beyond those dictated by the economic recovery. 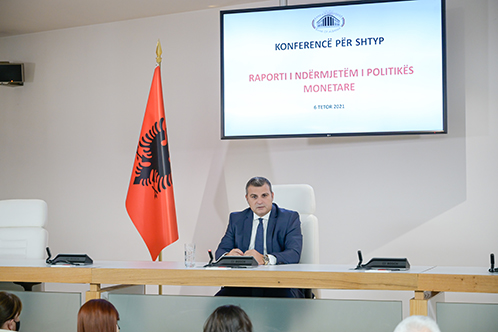 The updated forecasts affirm the projections for a further growth of Albanian economy over the medium term, which in turn will establish the premises for the stable convergence of inflation to target during 2022.

Nevertheless, the materialisation of these projections depends on the course of the pandemic, the stability of global economic recovery, and the impact of current supply-side shocks. The increase of prices in global markets will affect the performance of inflation, in Albania and internationally. This impact is expected to be temporary, but it constitutes a risk factor to the level of inflation and - potentially - to the speed of economic rebound.

Judging on the expected economic and monetary developments, and the balance of risks surrounding them, the Supervisory Council assesses as necessary to maintain the accommodative monetary policy stance. The monetary stimulus has continued and will continue to serve to the stable return of inflation to target, and underpin the economic growth.

Following, I will introduce in more details the reasons backing the decision-taking.

The new information of recent months has confirmed the trends as expected by the Bank of Albania, although the economic growth was faster and inflation somewhat higher than expected.

Inflation settled at 2.2% and 2.4% in July and August, trending upwards from 2021 H1. This upswing in inflation mainly reflected the increase in food and oil prices. Meanwhile, prices of other basket items did not change significantly.

From the macroeconomic perspective, the increase of inflation reflected the shocks stemming from the external environment, due to the upsurge of prices in international markets. In recent months, prices of commodities, foods and energy products have picked up swiftly. This increase has reflected both the rebound of global demand coupled with the difficulties encountered by the return of supply in pre-pandemic levels. Current projections show a normalisation of the situation in the next year, by suggesting that it will considerably affect the final prices of consumption, but temporary. Nevertheless, central banks, worldwide, continue to be attentive to the performance of energy products and commodities prices.

On the other hand, inflationary pressures generated by the domestic economy appear upwards, but still contained. This performance is triggered by an increase of employment and wages which still is insufficient for inflation to converge to target.

According to INSTAT data, the Albanian economy grew by 17.9% in the second quarter of 2021. This growth suggests that the Albanian economy has almost recovered the losses in the economic activity caused by the earthquake and the pandemic. The analysis of available data shows that, the growth in 2021 Q2 reflects, not only the strong base effect of the sharp economic fall in the second quarter of the previous year, also the extent and strength of factors fuelling the growth in the first half of year. In addition, the analysis of indirect data suggests fast growth rates in the third quarter as well.

The improvement of economic activity has started to be reflected in the labour market, although its recovery remains partial.  Employment rose by 1.1% in the second quarter, while unemployment rate declined to 11.6%. Notwithstanding the improving trends, employment continues to be lower and the unemployment rate higher than the pre-pandemic levels. The return of economy to full employment seems to need more time and continuous support with macroeconomic stimuli.

Fiscal and monetary policy has provided the adequate support to the economic recovery.

Fiscal stimuli remains in positive territory, but its intensity has been reduced over the last months. This performance is conditioned by the slowdown in the pace of realising public expenditures vis-a-vis the high rates of revenues collection. In the next year, the Bank of Albania expects a return to the consolidation of fiscal policy orientation. This would serve to both the increase of reaction space to potential shocks in the future, and in terms of the adequate sequencing of policy normalisation.

The monetary stimulus has provided a favourable financial environment for the growth of economy and for inflation return to target.  Financial markets are functioning smoothly, financing costs to both public and private sectors are low, and the banking sector balance sheets are solid. In addition, lek exchange rate has manifested a slight appreciation during the months of summer, in line with its seasonal behaviour. The Bank of Albania assesses that financing conditions for bolstering aggregate demand remain adequate and reflect a good transmission of our monetary stimulus.

Bank credit continues to be a stable funding source to the economy, by reflecting the favourable financing conditions, the increase of the demand and the positive approach of banks to lending. Credit to private sector grew 8.4%, on average, in July and August. Credit growth has financed the expansion in the investments of Albanian firms and households, and meeting their needs for liquidity. Also, lending continues to preserve two positive features: first, loans in lek continue to show a high growth pace, hence indicating a good transmission of the monetary stimulus, and the enhancement of the banking system resilience to risks. Second, non-performing loans ratio fell below the level of 7.0% recorded in August, suggesting a good quality of this portfolio.

Overall, economic outlook remains positive. The Albanian economy is expected to grow faster in the current year and to expand at a stable pace in the next years. The favourable external environment, the reduction of uncertainty in Albania, the simulating fiscal-monetary policy mix and the improvement of private sector balance sheets will underpin the economic growth. These factors are expected to boost the increase in consumption, exports and investments. The expansion of the demand will support the increase of employment, in turn, further rise in wages, and a gradual convergence of inflation to target within 2022.

Risks to this forecast are balanced, although the performance of economy remains object to possible adverse shocks from the pandemic, while upside risks to inflation depend on the course of prices in global markets.

Potential downside risks arise from: (i) replacement of restrictions due to a worsening of the epidemiology situations; (ii) a lower recovery of investments and consumption due to a more careful approach of firms and households; and (iii) a faster tightening of monetary conditions in euro zone, driven by the last increase of inflation.

Potential upside risks arise from: (i) a faster growth of economic activity driven by a smoother fiscal consolidation; and (ii) a more rapid or persistent rise of prices in global markets. In particular, the last scenario is increasingly drawing attention in the last weeks, by reflecting the sharp upsurge in oil, natural gas and energy prices in global markets, and their impacts in the tightening of monetary policies.

Judging on these projections, the Supervisory Council of the Bank of Albania deemed that the current monetary policy stance remains adequate.

In this view, the Supervisory Council decided to:

Also, the Supervisory Council deems necessary maintaining the current liquidity injection auctions with fixed price and unlimited quantity to the banking sector during the last quarter of 2021.

The Supervisory Council assessed that the materialisation of expectations in the baseline scenario - which forecasts the adoption of a consolidating fiscal policy direction, the continuation of economy rebound, and temporary impacts on inflation from supply-side shock - would require the gradual normalisation of monetary policy over the next quarters. This normalisation would serve to both: our mandate to maintain price stability; and a sustainable economic growth over the medium and long term.

In addition, the Supervisory Council will continue to monitor the consequences arising from the increase of prices in global market. In case this surge would prove to be sharper and more persistent in time, and if this impact on the domestic inflation will be higher than the current expectations, the Supervisory Council remains ready to review the monetary policy stance; being attentive the latter is always in line with our inflation target.