On 14 December 2016, Mr Gent Sejko, the Governor of the Bank of Albania, was invited at the year-end event organised by the Albanian Association of Banks, attended by executives of the main financial institutions in Albania.

In his address to the event, Governor Sejko briefly highlighted the main global and Albanian economic developments, and the performance of the banking system in addition to the challenges faced in 2016. 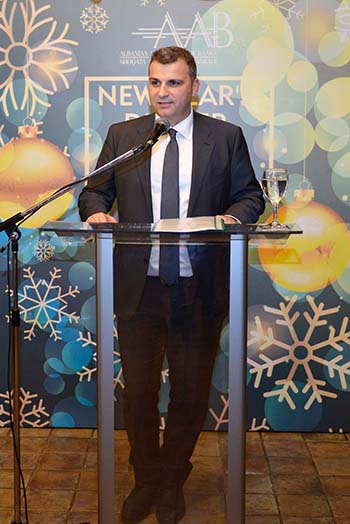 '... The low interest rates and the liquid and well-capitalised banking system are positive premises for the growth of credit and the financing of economic growth. The Bank of Albania deems that a complete and timely implementation of the Action plan for reducing non-performing loans will significantly contribute to improving the financial environment in the country.'

The Governor of the Bank of Albania, Mr Gent Sejko noted that 2017 will be again a challenging year. While successes have been achieved in 2016, the global situation remains complex. From this point of view, the Governor emphasised the important role of the Albanian banking system as intermediary and supplier of the economy with money.

Governor Sejko noted that in 2017, the Bank of Albania will maintain a regular communication with commercial banks, as a crucial element to identify the problems and improve the implementation of the legal framework to overcome them.

At the end, Governor Sejko thanked the newly-elected Chairman of the Albanian Association of Banks, Mr Periklis Drougkas, CEO of Alpha Bank Albania, and wished him success on this new endeavour.