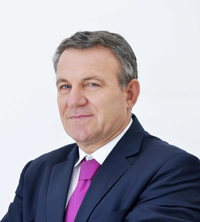 Prof. Dr. Arben Malaj graduated in finance in 1986 from the University of Tirana. He holds the title “Professor” since February 2016.

In 2005-2006, he attended the “Senior Fellows Program” at Harvard's John F. Kennedy School of Government Centre for Business and Government. His research focused on the economic and European integration prospects for Western Balkans. He has attended specialised postgraduate courses in European and American universities and has participated in many national and international conferences.

Over his long and rich professional career, Prof. Dr. Malaj has provided valuable contribution to both the academic and the public sector spheres.

Prof. Dr. Malaj is co-founder and former-President of the Institute for Public Policy and Good Governance. In 2016-2017, he served as the Rector of “Luarasi” University. Over his long and rich professional career, Prof. Dr. Malaj has lectured full and part-time at the Faculty of Economics, University of Tirana.

He has authored a number of economic studies and has supervised many PhD students on their thesis regarding local, regional and global issues. His rich bibliography consists of scientific publications in Albania and abroad. He has co/authored a number of textbooks.

Prof. Dr. Malaj has delivered a series of open lectures in various universities in Albania, in our region and in the US.  He also contributes to the public discussion, in electronic and print media, on economic and financial matters in Albania.