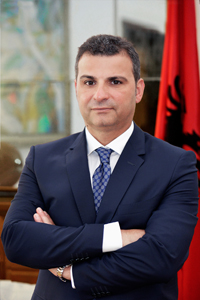 Mr. Sejko graduated from the Faculty of Economics, University of Tirana, in 1991, in industrial economics. He earned a Master's degree in International Accounting and Financial Management (MAcc) from the University of Glasgow, Scotland, in 1997, with his thesis on the "Role of banks and privatisation of banks in economies in transition".

Mr. Sejko started his banking career in 1992 as Head of Credit Division of the National Commercial Bank. Then he worked as an Inspector at the Supervision Department of the Bank of Albania, until 1998, while pursuing his post-university studies.

During 1998-2000, Mr. Sejko worked for Deloitte & Touche as senior auditor and consultant, responsible for the management of audit procedures.

In the years 2001-2002, he worked for the American Bank of Albania as Head of Internal Audit and Compliance Division, and engaged in extending the branches network of the bank.

During 2002-2004, Mr. Sejko returned to the Bank of Albania's Supervision Department as Head of Division for on-site examinations.

From July 2010 to February 2015, Mr. Sejko was the Deputy General Manager and Head of Retail Department and Branches Network for "Société Générale Albania". In addition, he served as Member of the Assets & Liabilities Committee, Member of the Supervisory Council of SG Leasing and Member of the Credit Committee of the Bank.

Mr. Sejko is fluent in English and Italian.