The Bank of Albania organised on 27 October 2016 in cooperation with the South East European Studies at Oxford, the annual conference: "Aligning monetary policy with financial stability – their objectives, responses and interaction in times of uncertainty".

This conference is organised under the auspices of the Governor of the Bank of Albania, Mr Gent Sejko, and was attended by the Prime Minister of the Republic of Albania, Mr Edi Rama, ministers and members of the Albanian Parliament. The conference was also attended by governors, deputy governors, and high-level representatives and management boards from central banks, ambassadors in Albania, representatives from international financial institutions, such as the International Monetary Fund and World Bank, representatives from the academia, the banking and financial system, media and Bank of Albania's staff. This conference is organised in the framework of the Co-operation Agreement signed between the Bank of Albania and the University of Oxford. 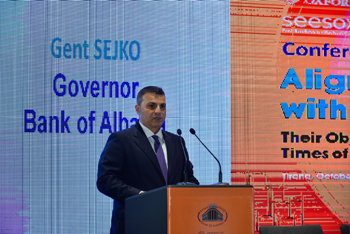 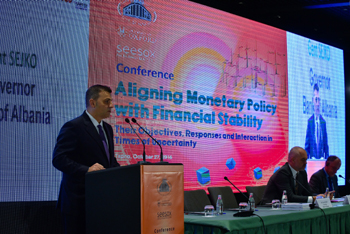 Addresses by H.E. Edi Rama, Prime Minister of the Republic of Albania, Mr Gent Sejko, Governor of the Bank of Albania, and Mr Othon Anastasakis, Director of South East European Studies at University of Oxford opened the conference proceedings.

In his address, Governor Sejko presented an overview of the macroeconomic developments in Albania, pointing out that the Albanian economy has maintained a positive growth trajectory, despite the unfavourable international backdrop. He added that economic growth is expected to pick up and the main economic balances to strengthen in the next years. In this regard, the Governor highlighted that the Bank of Albania is committed to providing the needed contribution for sustainable economic growth and maintaining its central inflation target.

The Bank of Albania is implementing an accommodative monetary policy, and is paying due attention to the reform in both the financial and banking supervisory sectors. The legislative and regulatory amendments in cooperation with the Parliament, the Government and other relevant institutions to boost lending in Albania, are particularly important in this regard. Governor Sejko stated that the solution of non-performing loans is an important priority to both the banking system and the entire economy of Albania. 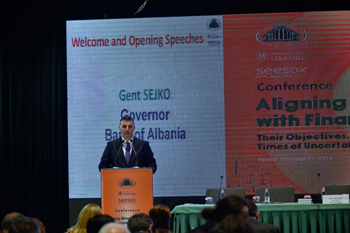 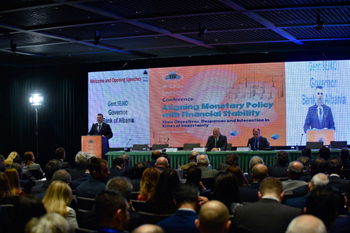 Governor Sejko focused also on the most recent developments in the euro area and in the region, and their implications for the Albanian economy. In this regard, Governor Sejko guaranteed that, regardless of these developments, the Bank of Albania stands ready to provide all the necessary contribution to support a steady economic growth.

Further, the Governor highlighted that the coordination of the monetary policy with the necessary measures to maintain financial stability still remains a challenge to the policymakers. He underlined that, in Bank of Albania's vision, the monetary policy oriented toward price stability, as well as the supervisory and regulatory policy oriented toward financial stability contribute to the sustainable and long-term development, and complement each other.

Concluding, he pointed out that it is essential to continue with structural reforms, which would contribute to strengthening the economic and financial stability in Albania.

In his speech, the Prime Minister of the Republic of Albania, Mr Edi Rama, emphasised that we managed to overcome the critical moment of 2013 thanks to the coordination of the policies, and now, after three years of a comprehensive recovery, Albania is moving towards a new economic model. “ During these years, the policies of the Government and those of the Bank of Albania have been fully coordinated, thus enabling us to overcome a collapse situation that was jeopardising the Albanian economy in 2013. After three years of a comprehensive recovery, the finances of Albania are consolidated; public debt is on a downward trend, while revenues are up". Thus, the Albanian economy grew by 3.2% in the second quarter, while next year, according to all forecasts, it is expected hit 4% growth.” - stated the Prime Minister.

Further, the Prime Minister stated that the regional and global landscape appears fragile and with a lot of question marks; hence, to face the risk of any potential crises, we are committed to enhance the collaboration with local and international stakeholders, in particular, with the current and potential businesses and investors.

Concluding, Prime Minister Rama commended the Bank of Albania for its role and contribution in maintaining financial stability and the support for the further macroeconomic development of Albania. The policies implemented by the Bank of Albania have promoted a liquid, profitable and well-capitalised banking sector, capable to withstand various shocks. 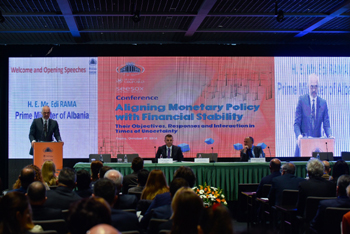 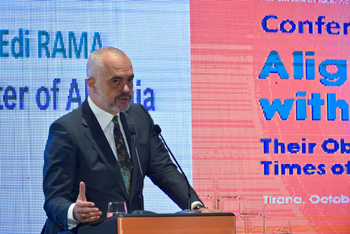 The first session of the conference explored the potential political and economic challenges and implications resulting from Brexit in the European integration process; how Balkan economies may better co-ordinate the Western Balkans economies with more advanced EU economies to sustain growth and stability after Brexit.

The discussions in the second session focused on the effects of the current developments in the new reality that the Eurozone and the region are facing. Discussions focused also on the necessary ways to coordinate the monetary policy with financial stability and its significance for central banks objectives and positive and negative aspects arising from this coordination.

Discussions in this panel focused on the adequacy of the policy instruments in dealing the current problems, and the use of tools and instruments of the monetary policy and financial stability interchangeably. Panellists shared their opinions and views on these issues. 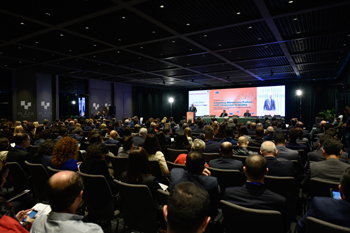