This conference will attempt to raise a number of issues related to the monetary policies pursued and targeted by SEE countries, and in particular to those concerning Bank of Albania’s policy.

It is my pleasure to have you as my guests in this important event for Bank of Albania. I believe this conference to be one of the highest points in our yearly activity and for this reason I feel good when I see in the hall many friends of mine, honorable professors, outstanding economists, government officials, bankers as well as representatives from the media. 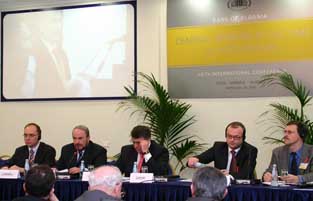 We decided to call this conference, The Central Bank in the Time of Integration because of the vital importance this difficult process has for our country and a number of other countries represented in this activity. We have by now understood that without financial integration we may not have true integration. I understand that we need more revenues, more political stability, and more cultural and social integration but of course, the so called financial integration is important as well. In this context, I believe that the role of the institution that I head, the role of the banking system, and that of the financial sector in more general terms, is very important and the challenges to be faced in this direction are numerous.

I believe that what we need concerns the marketing of values and that of the truth on the Albanian reality. I hope this conference will be a modest contribution in this direction. I wish banks and finance to be the vanguard in the road towards integration.

Allow me to one more time wish successful proceedings.

Conference publications (Availables only in Albanian)

Presentations and discussions in the Conference

During two days of the Fifth Conference of the Bank of Albania on "Central Banking in time of integration", having guests from the country and international institutions, personalities of academic and banking area, too many important ideas and suggestions emerged. The tight agenda did not allow detailed discussion on them; however, I hope that they will serve as starting points for further debates and analyses to sort out central bank challenges in the time of integration.

It is somewhat difficult to make a concise summary of numerous papers presented in this conference. I would categorize the main conclusion into two large groups according to the main pillars of the central bank, that is the price stability and the financial sector stability.

Concerning the first pillar, that of price stability, the discussions were focused mainly on the monetary policy effectiveness and central bank independence. To maintain stability is more difficult than to achieve it. Prof.Bolle indicated in a very excellent way that current price stability should be considered as fragile, which requires constant efforts, either by the BoA or by other institutions. Therefore, in his discussion, Mr.Ibrahimi emphasized that the Bank of Albania is prudentially analyzing the risks that we may be faced with in the future on maintaining price stability. He came out with the proposal of adopting a new inflation targeting regime that may be better adjusted to the new reality that the Bank of Albania and the Albanian Economy will encounter.

However, simply the mechanic implementation of this new regime is not a sufficient condition for price stability. A number of other criteria must be met to increase the chances of its success, without adding pressure at the Bank’s reputation. A lot of such challenges were treated in details in other presentations at the conference. Among the most important ones, I would mention:

Issues on central bank independence, which were referred to by most presenters, but I would point out here those presented by Mr. S.Rossi and Mr. L.Papi. The significant role of independence, not only on monetary policy, but also, particularly on the second pillar, that of financial sector stability and development came out clearly in these presentations.

The clarity of Monetary Policy channels and enhancement of the effectiveness of its instruments is another important issue that requires particular attention, notwithstanding the current regime applied. The presentations on this issue by Ms. M. Peeters yesterday and by the experiences of various countries during today’s panel of the conference were very useful.

Fiscal domination remains a constant risk to price stability, as it came out of the experience presented here by Mr.Baschi (Turkey). We hope that the commitment of the government for developing a better coordination of monetary and fiscal policies will continue in the future, as the Minister of Finance, Mr.Malaj stated in his speech. This idea was further
elaborated on in the presentation authored by Mr. Hida and Mr. Haderi.

Dollarisation or FX may constitute another obstacle that places financial stability and monetary policy independence at risk, as argued by Mr. Driessen. Therefore, it is a problem that needs attention.

What inflation rate should be targeted remains a subject of debate. This concern was presented by Mr.Olters. The Bank of Albania is closely addressing this issue in a very prudential manner, so that it does not become an obstacle for economic growth.

In light of the above difficulties for passing to a new regime, as stressed by Mr.Mayes, it is important to implement a robust strategy so as to avoid large mistakes.

Price stability, as stressed some times during the conference, helps economic growth. On the other hand, the second pillar of the Bank of Albania, the financial stability, is likely to play a more important role for economic extension. But, as Mr. Blejer stressed in his speech, stability should not be turned into an end in itself. A good regulated but undeveloped financial sector may be as ineffective as a deregulated sector.

In order to make the basic policies in economy more harmonized and effective, I would emphasize that the banking system and the other financial institutions of the country should be more effective, open and supervised. In the final analysis, it is very important to create a real financial market, where all actors know the rules of game and obey them fairly, as it came out in the presentations of Mr. Niedermayer, Mr. Danielson, Mr. Pencapligil and Mr. Bunda.

In conclusion, I would underline that the challenges ahead of us, on our way to development and integration, become easier when a spirit of cooperation exists not only within the country but also in the regional framework and broader.

Thanking you for your participation in this Conference, I declare it closed.